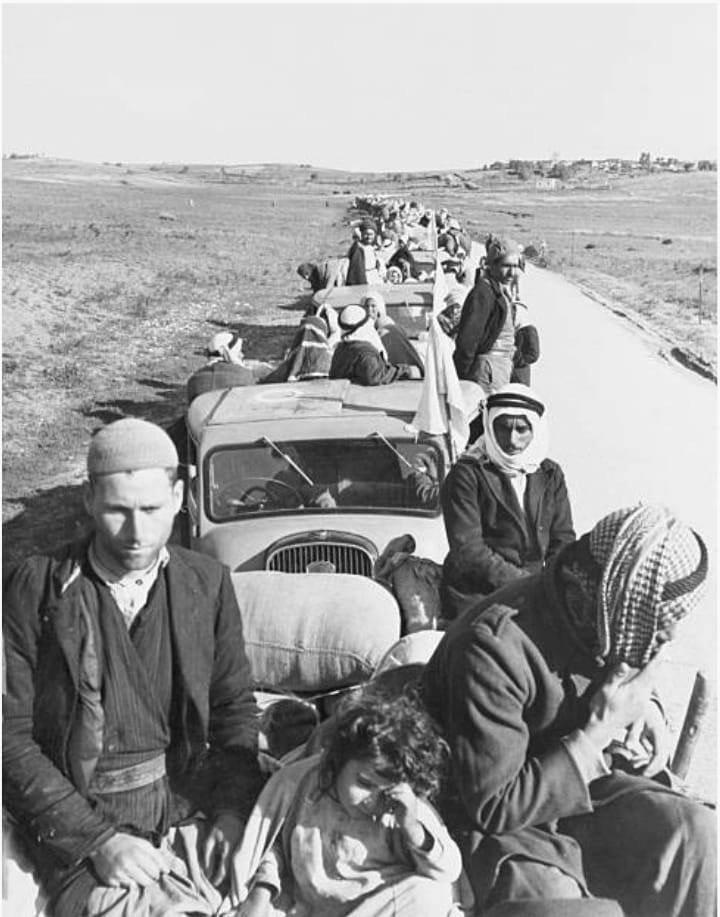 Palestinian are being ethnically cleansed out of Faluja in March of 1949
Soon after the Israeli invasion, a series of laws have been passed to organize the seizure and use of Palestinian property. The Absentees' Property Law of March 1950 transferred the right of the natural owner to a Custodian of Absentee Property and made him liable to the real owner for the value, but not the return, of his property (Lehn, p.131). The Palestinians who remained in Israel, especially in the Negev, were relocated away from their homes and declared Absentee. The Development Authority (Transfer of Property) Law of July 1950 was devised, as a legal ploy, to shield Israel's government from the accusation that it has confiscated abandoned property. The Development Authority is an independent body empowered to sell, buy, lease, exchange, repair, build, develop and cultivate Palestinian property. None of these transactions could take place except with a Jew or a Jewish entity. To give effect to this seizure, various Jewish bodies agreed that "under no circumstances should the Arabs return to Israel".
In the first ten years of occupation (1950-1960), a legal quarrel ensued between the Jewish National Fund (JNF) and the just-formed Israeli government. JNF had been purchasing land in the Mandate period in the name of the Jewish People. Israel's government seized the Palestinian land and intended to acquire title to it in the name of the state in recognition of the triumph of the Haganah and the flight of the Arabs (Lehn p.108). The JNF maintained that such land should be turned over to the Jewish people, not the state, since the latter, given the prevailing political and demographic conditions, cannot give adequate guarantee of lasting Jewish ownership.
The dispute was settled by formulating, on 25 July 1960, the laws:
Basic Law: Israel-Lands, Israel-Lands Law and Israel-Lands Administration Law, that is, Israel government, not the Jewish people. The JNF rules, of restricting transactions to Jews only, have been adopted by the state. Palestinian lands, whether acquired by JNF or seized by the state, would be administered by a single authority, Israel Land Administration (ILA), for the benefit of both parties under the old JNF rules.
The JNF was allowed, however, to increase its pre-Mandate holdings by purchasing land seized by the state. The position of land title in 1961 is as follows (ILA Report, Jerusalem 1962, in Hebrew, quoted by Lehn p.114): 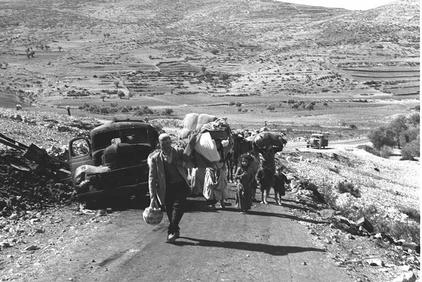 Palestinian Refugees on their way to Lebanon, Oct. 1948.
Thus, ILA administers 92.6% of Israel, which is Palestinian property. With few exceptions, these lands are leased to Jewish tenants. None of these tenants has title to the leased land. The lease term is 49 years, expiring in 1998, a convenient date for the return of the refugees.
With failure and bankruptcy of the Kibbutz movement, ardent Zionists like A. Sharon and R. Eitan introduced ordinances in 1997 to sell Palestinian land, now rented by Kibbutz, to builders and Jews anywhere in the world, whether Israelis or not, to dispose of Palestinian property and build more housing for new immigrants. The Kibbutz farmers were given compensation, which made them rich overnight. This Great Israel Land Grab in the words of Ha'aretz, poses a great danger to the refugees (Abu-Sitta, 1998). On 16 September 1998, The Arab League passed a resolution to urge the UN to send a fact-finding mission and appoint a Custodian of Palestinian property in Israel.