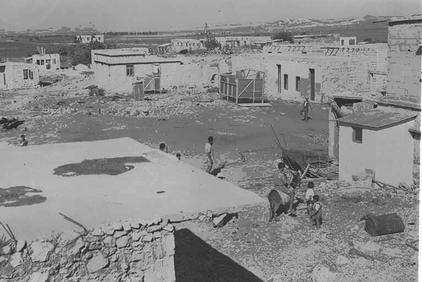 Click Image For Town Details
In the 1940s, the Haganah collected detailed intelligence information about hundreds of Arab villages and photographed them, in many cases from the ground and also from the air. Only a few dozen of these 'village files' survive in local archives, but their photos constitute a valuable, missing chapter in Palestinian history.

Many of the village files have been lost; only a few dozen remain in the various archives. However, a large number of aerial photographs exist, along with many textual surveys of the Arab settlements. An example is a report from September 1943 about the village of Rantiya (in the Jaffa sub-district ), which would be conquered five years later by the IDF in Operation Dani, when its residents were uprooted; three Jewish communities - Mazor, Nofekh and Rinnatya - were established on its land.

According to the survey, Rantiya was founded 600 years ago and lay about 1.5 kilometers east of the Lod-Petah Tikva road and the same distance west of the railway line. The village had one well from which local women carried water to the houses; its pump was built by the British government, which managed the well. There were three types of structures in the village: of cement and reinforced concrete, of wood and tiles, and of bricks and mortar (the minority ). The village was surrounded by vineyards. A wadi running nearby from east to west reached the village of Al-Yahudiya (where the Israeli town of Yahud was afterward built, though originally David Ben-Gurion wanted to raze the village ). Rantiya had an area of 4,500 dunams (1,125 acres ), of which 550 dunams were planted with citrus trees and 100 dunams with grape vines and olive trees. Various types of grains were grown on the rest of the land. "The harvest is generally very good," according to the information in the file. Of the 650 residents, some 140 were property owners, but none were effendis. There were two clans, which maintained "satisfactory" relations. The village had only one simple store and did not have a cafe. There was also one mosque, "in good condition and very clean," and a school in which one teacher taught between 40 and 50 children. There were 150 laborers in Rantiya, but no clerks working in the service of the British administration. During the period of the Arab Revolt, 1936-1939, some of the farm work stopped, and one person was killed on the Ras al-Ein road. The British authorities detonated a few buildings.