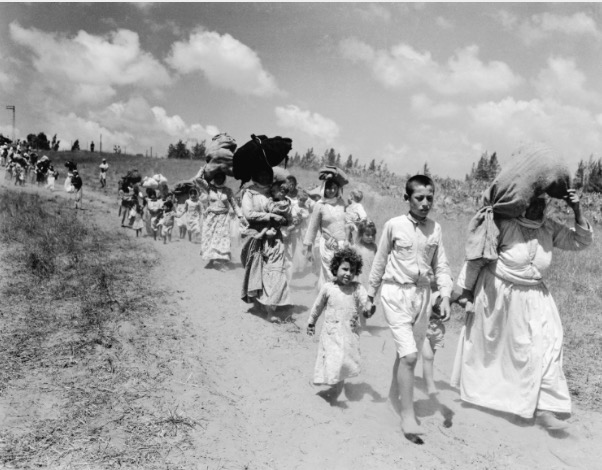 al-Tantura-Haifa, May 1948, Note how men, women & children were seperated just before the massacre
It is a common fact that one people's gain can sometimes be another's loss. Few events demonstrate this more vividly than the Allied defeat of Nazi Germany. While the historic victory brought peace and security to Europe, it also set in motion a cycle of conflict and instability that has bedeviled the Middle East region since 1948.
By carving out a state in Palestine for their unwanted Jews, the victorious powers effectually ignited a conflict which emptied Palestine of half its Arab population. Their long and ongoing struggle to return is the subject of this study.
Though widely seen as a humanitarian concern, the issue of the displaced and exiled Palestinians is, more fundamentally, a political problem derived from the breach of international law. The role of the Zionist political and military elite in masterminding and expelling the Palestinians is well documented in Israeli, American, and United Nations sources. Whatever the context, there is no doubt that the mass expulsion of a people from their homeland constitutes a violation of international humanitarian law. Thus it was precisely for this reason that when Israel tried Adolf Eichmann for atrocities committed as a Nazi leader, it included charges of expulsions which were classified as "war crimes" and "crimes against humanity".
Under these rules, the Palestinians are entitled to return to their homes and property not as a privilege or favor from Israel but as a fundamental humanitarian, legal and national right. Yet, Israel has maintained throughout the past fifty years that there is a direct linkage between the return of the refugees and the resolution of suspended issues with its Arab neighbors. This position is, however, untenable on all counts since the instability and turmoil that has plagued the region was not caused by the refugees themselves but was rather the result of the denial of their national rights.
Still within this context, neither the passage of time nor the political changes brought about by the creation of Israel have nullified the right of return. There are in fact several examples of displaced peoples who were in recent times repatriated to their homes. Notable among these were the Crimean Tartars who were the victims of internal deportation by the Communists authorities for cooperating with the Germans during the Second World War .They were repatriated after the collapse of the Soviet Union.
Similarly the right of the Palestinians are guaranteed in the law of nationality, international humanitarian law, and the practice of the United Nations. Hence it is for this reason their repatriation is not the sole responsibility of Israel, it is also the obligation of the international community. Any attempt by Israel to resettle the displaced Palestinians in countries other than Palestine should be resisted by all concerned.
As part of its own effort to advance the cause of the displaced Palestinians, the Palestinian Return Centre is pleased to present its supporters and the wider public with this second and revised edition of Dr. Salman Abu Sitta's acclaimed work Palestinian Right to Return...Sacred, Legal and Possible. The decision to reprint this study was occasioned by a combination of factors. Foremost of these have been the success of the first edition, the growing popular demand for its reprint, and the rapid developments on the political front. By responding to all of these we hope to take the debate on this subject to new heights without changing its original and central theme. That the return of the Palestinians is a humanitarian, legal and political responsibility of Israel as well as the international community.
PRC
London
May 1999