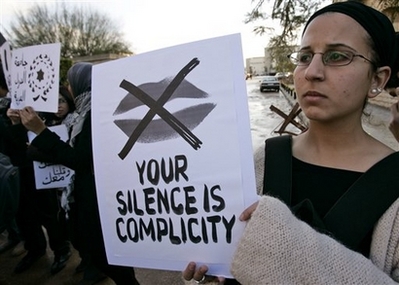 A little travel has gone a long way toward changing perceptions in Gaza.

After excursions to Egypt across a border breached by Hamas militants, some Palestinians pepper their local Arabic dialect with Egyptian expressions while others say they are shocked by the poverty there.

Jihad Jaradeh, 24, a Gazan whose family owns a furniture shop, reached the Egyptian town of El Arish, some 25 miles from the border. Although shop owners doubled and tripled prices, Jaradeh paid up, saying he even gave extra "because they looked so poor."

Jaradeh is not typical; two-thirds of Gazans live on less than $2 a day. But many travelers remarked on the discrepancy between their more glamorous image of urban Egypt ؟ derived mostly from movies ؟ and the run-down border region of unpaved streets and small houses they encountered.

A trickle of Egyptians made it into Gaza, and they got a warm welcome.

One Egyptian truck driver ignored a policeman's order to stop and rolled through an intersection in the southern Gaza town of Khan Younis. Instead of being reprimanded by the normally stern Hamas traffic police, he was cheered by onlookers.

Said Mohammed stood in a Gaza City market, next to his pickup truck with red Egyptian license plates. From the back of the truck, two men, who had paid Mohammed to deliver the cargo, sold Egyptian-imported smoked herring to curious residents.

After the border breach, Mohammed drove for days to dodge Egyptian security checkpoints, making money by renting his truck to Palestinians who wanted to ferry goods into Gaza.

"I've always wanted to see Palestine anyway," said a smiling Mohammed, a slight dark man with black eyes. Pointing to cars crowding a nearby street, he said: "I thought conditions here would be harder than this. I thought people would be starving."

A trip to Egypt has become a status symbol, and many Gazans have picked up Egyptian slang.

Five days in Egypt was enough for Gazan Taysir Muammar, 37, who loudly joked with friends in a broken Egyptian dialect, replacing the Palestinian "j" (as in jug) with a hard Egyptian "g" (as in got).

Gazans have picked up new phrases across the border, like the filler word "bitaa," loosely translated as "stuff," and the Egyptian greeting "ezayak" instead of "kifhalak" to ask "How are you doing?"

Fresh off a round of cancer treatment, Muammar dodged four Egyptian checkpoints to reach Cairo where police arrested him and returned him to Gaza.

He said his new accent was proof of his visit ؟ and his love for Egyptians.

"The people are really nice. I blame the police for what happened to me, not the people," Muammar said.

The border breach has given Gazans a lot to talk about, said Naji Shurrab, a political scientist at Azhar University. "In closed rooms and alley ways, people aren't talking about Hamas and Fatah anymore," he said, referring to the bitter political rivalries.

"They are talking about prices (of goods in Egypt)," he said. "Even the women in their living rooms ... are comparing what their husbands bought and showing off."

Egypt ruled Gaza for nearly 20 years, until Israel conquered the territory in 1967.

The speed with which Gazans bought up Egyptian goods prompted comments here that Gaza's 1.5 million residents are well on their way to colonizing Egypt (even though it has 77 million people).

One Palestinian cartoon passed around by e-mail shows a Gazan throwing a rope over the Sphinx, trying to drag it into Gaza.

A common quip is that Hamas should drop its "Save Gaza" slogan, coined in response to Israeli border closures, in favor of "Save El Arish" ؟ in this case, from Palestinian shoppers.

Still others jest that Egyptians will storm Gaza if the breach is sealed because the Palestinians have picked them clean.