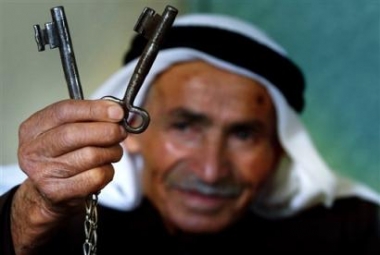 he Associated Press, in its report quoted by the Herald Tribune and Haaretz on Feb 11, 2008, said that Qiryat Yam sued Google Earth " for slander" because its worldwide map service showed the town was built on the ruins of an Arab village, Arab al Ghawarina or Jidru, in an entry made by Thameen Darby.
Qiryat Yam official claimed that this is not true, no Palestinians were expelled from the site because there was none and the Jewish village was founded in 1945, before Israel was established.

This is not true. Sheet 15/25, 16/25 (Acre) of the Survey of Palestine (under the British Mandate) does not show Qiryat Yam. Instead, it shows Al Ghawarina - Jidru. The land from the edge of the Arab village site to the sea is marked on the map as "Government Forest Reserve No. 2). Aerial surveys taken by RAF in 1946 show no such Jewish village (photo available for inspecting).

As a further proof, sheet V of Palestine Exploration Fund survey, which started its work in 1871 and printed its maps a decade later, shows Jidru at the same location of the British Mandate maps. This confirms the existence of Jidru from old until 1948 when Qiryat Yam was built on its ruins.

Some of the expelled Ghawarina fled to Jisr al Zarqa, which is an Arab town in existence for many decades before Israel was established.

Al Ghawarina earn their living as farmers, ploughmen and cattle breeders, especially buffalos. The latter explains why most of them lived near Hula Lake before they were too expelled by Israel in 1948.

Professor Yossi Ben - Artzi of Haifa University told Yediot Ahronot that Google's entry is "simply complete nonsense" and that land was bought by Jews in 1939. He was probably referring to Kefar Masaryk which was founded in that year and served as a Haganah base to attack and depopulate Galilee, which took place later.

Qiryat Yam started building huts on Jidru site to accommodate Jewish Brigade soldiers of WWII who came to help in the occupation of Palestine. Its entity as town was confirmed only in 1976 when it received "municipality" status.

But the whole controversy fades against the total picture of al Nakba of 1948 when the Palestinian population of 655 towns and villages were depopulated, who now make 7 million refugees. Their confiscated land is 93% of Israel's area. Arguing about 1,2 or 10 sites will not alter the fact of the 1948 ethnic cleansing, which will remain the core of the conflict unless peace based on justice is achieved.

Dr. Salman Abu Sitta
Palestine Land Society, London
(dedicated to the documentatin of the land and people of Palestine)
Disclaimer