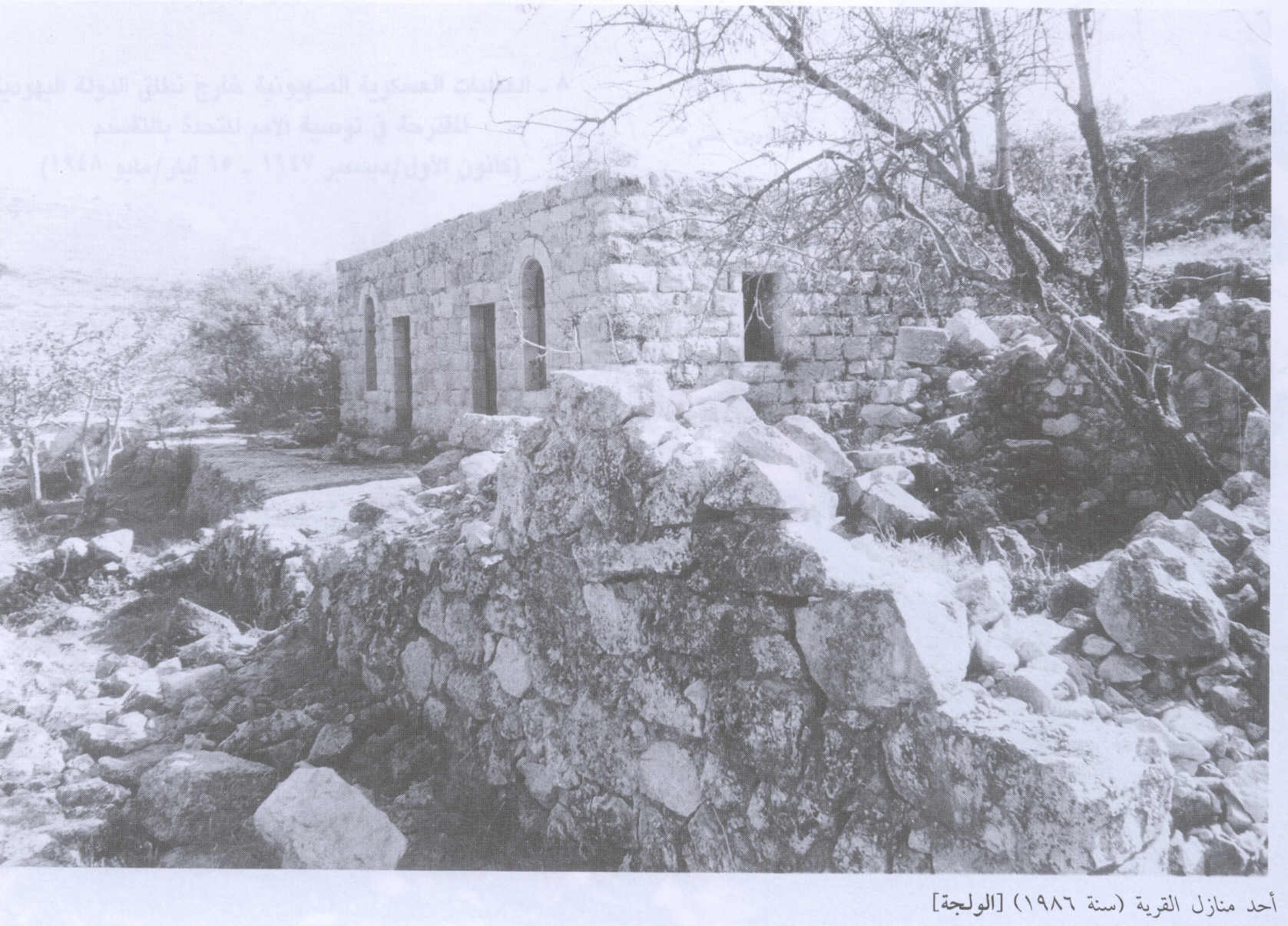 Click Image For Town Details
This story was written by a Walaji and I am pleased to publish it here so other Walajiah can read it..

Abu Nidal finds the original location of Walaja on a map dating from the 1920s.Walaja is located south west of Jerusalem. The village was Occupied in October 1948, but Palestinian and Egyptian guerillas fought off the Israeli battalions and successfully defended their village. Several times they were able to force the Occupation troops to withdraw, but in the end the village was Occupied. (Al Khalidi, Wallid 1992: All That Remains). The village was then destroyed, and Aminadav settlement was built on its lands along with an Israeli park. The people of Walaja, who numbered some 1200 people at that time, were expelled and turned into refugees. Some of them remained in lands of Al Walaja that were not occupied, while the rest left to Jordan, or moved into the refugee camps in Bethlehem. After 1967 the Occupation annexed the rest of Walaja to the Occupation municipality of Jerusalem, but without giving the people from Walaja the right to live in Jerusalem, who were then threatened with expulsion once again. Since the late 80sThe Occupation forces have been using various policies against the people to force them to leave what is left from the village, including house demolitions and repeated arrests against the 3000 people living now in the village, using the pretext that ؟they have West Bank identification cards and are living in Jerusalem؟. The Apartheid Wall, as projected, will surround Al Walaja from all sides isolating it completely from its lands, the original village, and Jerusalem. About the 1948 exodus, Abu Nidal, a farmer from the village, says: ؟This is not the real Walaja, this is part of its lands, and the original Walaja was between Battir and Malha. In 1948, it was destroyed by the Occupation bulldozers more than once and its lands were confiscated. After 1967, the Occupation confiscated the rest of its lands for the ؟Gilo؟ settlement, Gilo is built on more than one third of Walaja؟s lands. In the seventies the Settlers in Aminadav took over more lands from Walaja and began cultivating them, while the Occupation forces sued the Walaja farmers, claiming that they were using the lands of the ؟state of Israel؟, although the ؟truce line؟ is far from us, but they considered these lands as ؟no man؟ lands. They [occupation forces] also planted a forest on the green line but they crossed it. After 1948 the people of Walaja moved to these lands here, they lived in mud houses, and caves, the ones who had money lived in stone houses, we had nothing here, no services, no roads, no water or electricity supplies. We created everything in the following years, but we still hoped we would return. The ones who settled here were part of the village؟s people, the rest went to Jordan, now there are twenty thousand refugees in Jordan camps from Al Walaja, another part are living in Bethlehem؟s refugee camps. In 1967, another group of people left, we are scattered everywhere. My brother and sister are living in Jordan, I have another sister who is living in Jerusalem, my daughter too is living in Jerusalem, and I cannot see any of them. After the Occupation of 1967, the Occupation decided to consider Walaja as a Jerusalem area. They claim that it was annexed in 1967, but they never informed us until 1987 when they came and started demolishing our houses under the pretext that we do not have building permits from the Occupation municipality in Jerusalem. Until now 15 houses have been demolished, 52 other houses are still waiting in courts. This is in addition to the fines the people have to pay, which are usually between 20 to 50 thousands NIS depending on the area where the house is located. The new policy they are using now is they invade people؟s houses in the night and arrest the men, accusing them of staying in Jerusalem while they do not have Jerusalem Identification cards, and they take them out from their beds. Five brothers were arrested last week [interview on April 28 2004] under the same pretext. The brothers are from Abd Sheikh Family, and another two brothers were arrested too, although their house has been there since the British mandate in Palestine. They are sending them to military courts; they want to uproot us from here. This is a policy of terrorizing and expulsion. They keep coming and warning the people to leave their houses, but not officially. The people here are afraid all the time that they will be arrested or to have their houses demolished. The Wall according to the maps is about settlements, there are several settlement projects on the lands they are confiscating, and most of Walaja lands have been surveyed for new settlements. > We do not know what our destiny will be, what they are planning for us, we will be refugees more than one time.