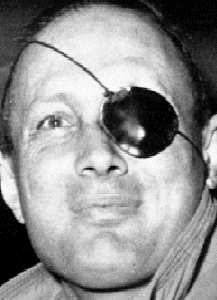 1915-1981
Moshe Dayan belonged to a new generation of tough home-grown military commanders. Born in 1915 to Shmuel Dayan (member of the first Knesset) in Degania near the Sea of Galilee. In 1935, he joined the Haganah in his teens, and in 1941 he lost an eye in an Allied operation against the forces of the French Vichy Government in Lebanon. During the 1948 war, his battalion captured Ramla and Lydda, and he later became the governor of Jerusalem. He held several positions in the Israel Defense Force as a chief of staff and a minister of defense during the 1967 war. When Ben-Gurion was the Prime Minister of the "Jewish state", he was regularly consulted on defense issues. Besides his military career, he also was a farmer, a secret poet, an amateur archaeologist, a politician, and a statesman, who usually spoke briefly and to the point.

Moshe Dayan stated his opinion regarding his anti-infiltration policy in the early 1950s:

"Using the moral yardstick mentioned by [Moshe Sharett], I must ask: Are [we justified] in opening fire on the [Palestinian] Arabs who cross [the border] to reap the crops they planted in our territory; they, their women, and their children? Will this stand up to moral scrutiny . . .? We shoot at those from among the 200,000 hungry [Palestinian] Arabs who cross the line [to graze their flocks]---- will this stand up to moral review? Arabs cross to collect the grain that they left in the abandoned [term often used by Israelis to describe the ethnically cleansed] villages and we set mines for them and they go back without an arm or a leg. . . . [It may be that this] cannot pass review, but I know no other method of guarding the borders. then tomorrow the State of Israel will have no borders." (Righteous Victims, p. 275)

In the mid-1950s, Moshe Dayan was anxious to initiate a "preventive" war against Egypt to neutralize the modernization of its army, according to Moshe Sharett's diary:

"Moshe Dayan unfolded one plan after another for direct action. The first---what should be done to force open blockade of the Gulf of Eilat. A ship flying the Israeli flag should be sent, and if the Egyptians bomb it, we should bomb the Egyptian base from the air, or conquer Ras al-Naqb, or open our way south of Gaza Strip to the coast. There was a general uproar. I asked Moshe: Do you realize that this would mean war with Egypt?, he said: Of course." (Iron Wall, p. 105)

Moshe Dayan wrote in the 1955 regarding the collective punishments imposed on Palestinian civilian population by the Israeli Army: 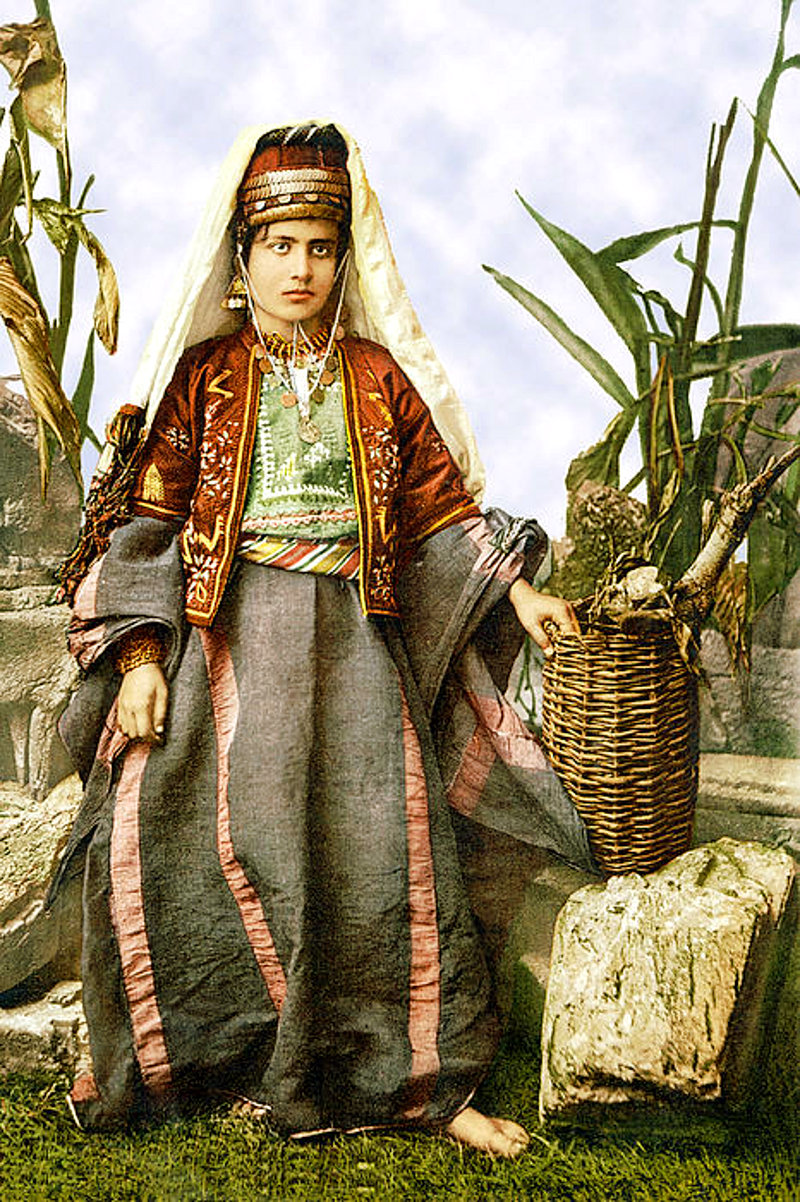 Pre-Nakba picture of a Palestinian Chrisitian girl from Bethlehem who "doesn't exist"; Zionists say!
"The only method that proved effective, not justified or moral but effective, when Arabs plant mines on our side [in retaliation]. If we try to search for the [particular] Arab [who planted mines], it has not value. But if we HARASS the nearby village . . . then the population there comes out against the [infiltrators] . . . and the Egyptian Government and the Transjordan Government are [driven] to prevent such incidents because their prestige is [assailed], as the Jews have opened fire, and they are unready to begin a war . . . the method of collective punishment so far has proved effective." (Righteous Victims, p. 275-276)

"We could not guard every water pipeline from being blown up and every tree from being uprooted. We could not prevent every murder of a worker in an orchard or a family in their beds. But it was in our power to set high price for our blood, a price too high for the [Palestinian] Arab community, the Arab army, or the Arab governments to think it worth paying. . . . It was in our power to cause the Arab governments to renounce 'the policy of strength' toward Israel by turning it into a demonstration of weakness." (Iron Wall, p. 103) The "too high" of a price Dayan is referring to is the collective punishment such as house demolition, uprooting trees, ..etc.

Moshe Dayan stated in an oration at the funeral of an Israeli farmer killed by a Palestinian Arab in April 1956:

". . . Let us not today fling accusation at the murderers. What cause have we to complain about their fierce hatred to us? For eight years now, they sit in their refugee camps in Gaza, and before their eyes we turn into our homestead the land and villages in which they and their forefathers have lived.

We should demand his blood not from the [Palestinian] Arabs of Gaza but from ourselves. . . . Let us make our reckoning today. We are a generation of settlers, and without the steel helmet and gun barrel, we shall not be able to plant a tree or build a house. . . . Let us not be afraid to see the hatred that accompanies and consumes the lives of hundreds of thousands of [Palestinian] Arabs who sit all around us and wait for the moment when their hands will be able to reach our blood." (Iron Wall, p. 101)

Moshe Dayan saw no need for American guarantees of Israel's security and strongly opposed America's conditions i.e. that Israel forswear territorial expansion and military retaliation. In an informal talk with the ambassadors to Washington, London, and Paris, Dayan describe military retaliations as a "life drug" to the Israel Army. First, it obliged the Arab governments to take drastic measures to protect their borders. Second, and this was the essence, it enabled the Israeli government to maintain a high degree of tension in the country and the army. Gideaon Rafael, also present at the meeting with Dayan, remarked to Moshe Sharett: 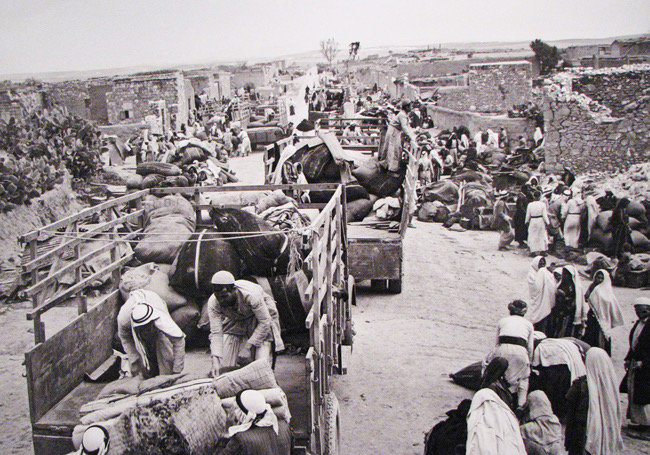 Faluja-Gaza, 1949, Ethnically Cleansed Palestinians on their way to Hebron
While planning the attack on Egypt in 1956, Ben-Gurion and Moshe Dayan were trying to work out a plan to internally destabilize Lebanon in favor of Christian-Maronite government, and in that regard Dayan proposed:

"All that is required is to find an officer, even a captain [later to be Sa'ed Haddad] would do, to win his heart or buy him with money to get him to agreed to declare himself the savior of the Maronite population. Then the Israeli army will enter Lebanon, occupy the necessary territory, create a Christian regime that will ally itself with Israel. The territory from Litani southward will be totally annexed to Israel, and everything will fall into place." (Iron Wall, p. 133-134)

It is worth noting that this adventure was implemented 25 years later during the Israeli invasion of Lebanon in 1978 & 1982, which wrecked havoc in the area, more than 20,000 civilians were killed, and on top of that Israel had to withdraw with its tail between its legs in May 2000.

and on the same subject, he worked out the objectives of the war to be initiated with Egypt in 1956: 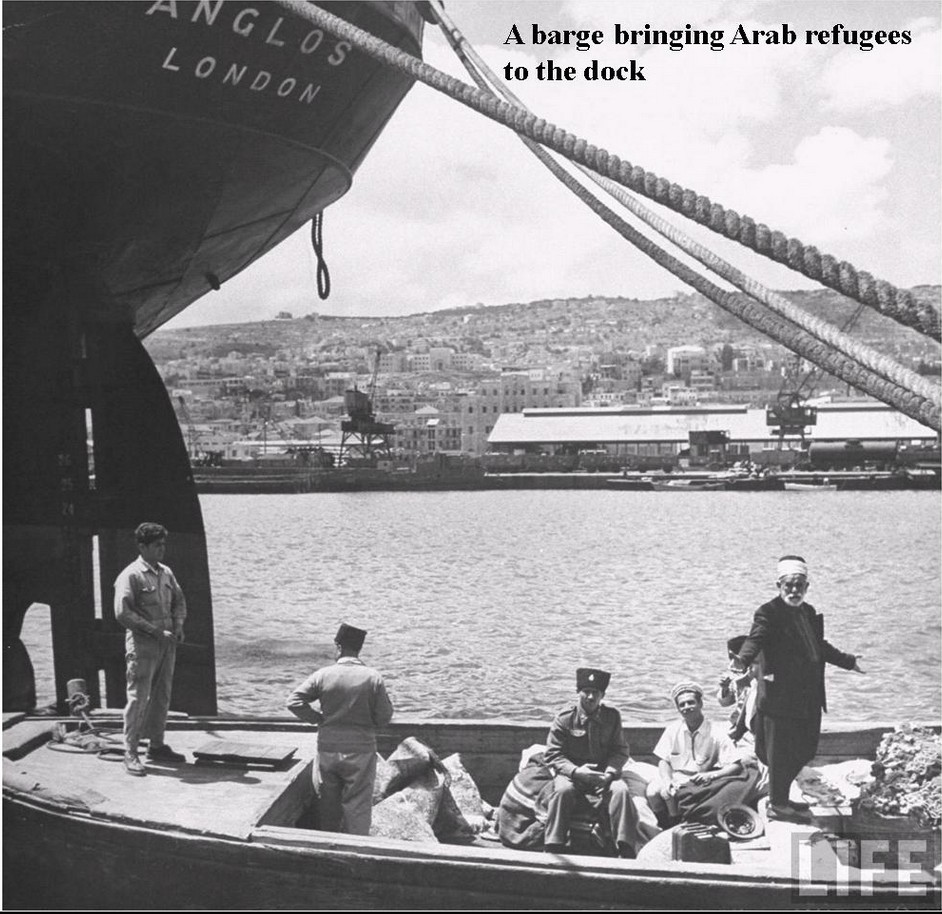 Who shall push who into the sea? Haifa's Palestinians are being loading onto ships out of their homes, April 1948
Soon after the 1967 war, Moshe Dayan wrote in his memories regarding the ethnic cleansing and destruction of the 'Imwas, Bayt Nuba, Yalu, and big portion of the West Bank city of Qalqilya:

"[houses were destroyed] not in battle, but as punishment . . . and in order to CHASE AWAY the inhabitants . . . contrary to government policy." (Righteous Victims, p. 328)

In September 1967 Moshe Dayan told senior staff in the Israeli Occupation Army in the West Bank that some 200,000 Palestinian Arabs had left the West Bank and Gaza Strip:

"we must understand the motives and causes of the continued emigration of the [Palestinian] Arabs, from both the Gaza Strip and the West Bank, and not to undermine these causes after all, we want to create a new map." (Righteous Victims, p. 338)

And in November 1967, he was also quoted saying:

"We want [Palestinian] emigration, we want a normal standard of living, we want to encourage emigration according to a selective program." (Righteous Victims, p. 338)

We next find Moshe Dayan addressing the Technion (Israel Institute of Technology), Haifa (as quoted in Ha'aretz, 4 April 1969). Dayan had no idea how much his statement has awakened thousands of sleeping horses who have dedicated themselves to proving him wrong: 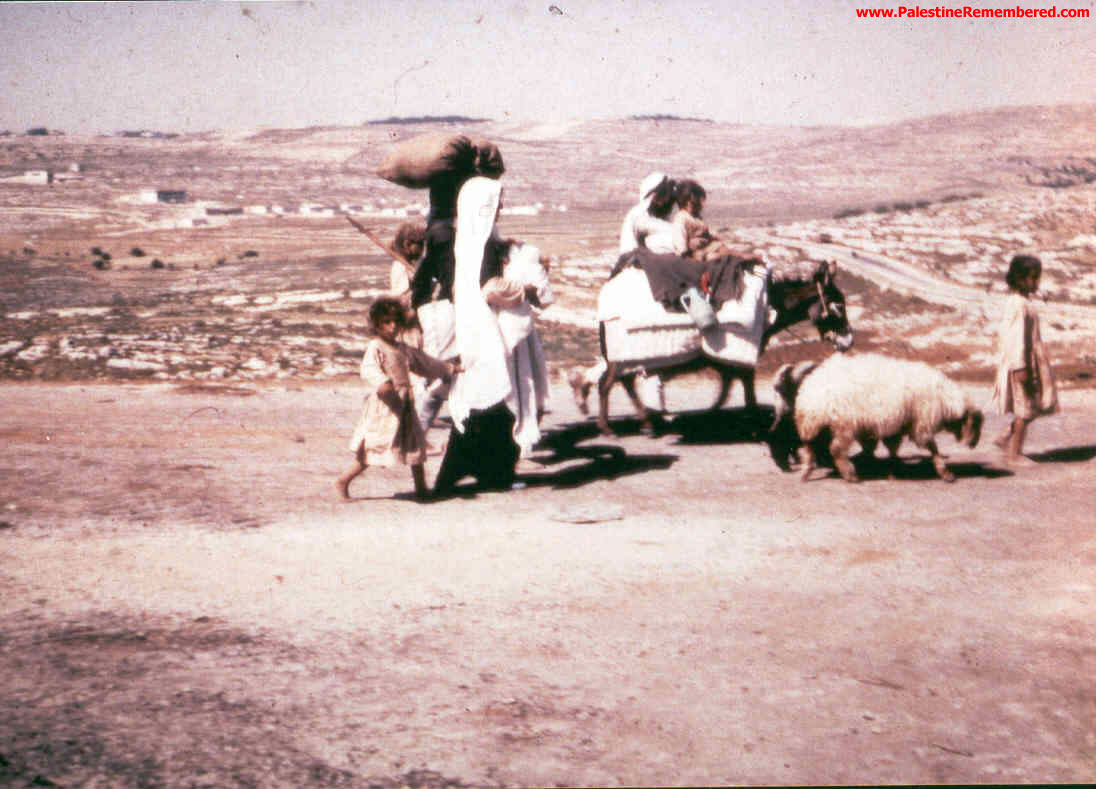 June 17, 1967 Palestinians were driven out of their village 'Imwas
In series of interviews conducted in 1976 with Moshe Dayan (which was later published in Yediot Ahronot after his death in 1981), he confessed that his greatest mistake was that, as a Minister of Defense in June 1967, he did not stick to his original opposition to storming the Golan Heights, and he described how the confrontation with the Syrian evolved to a war as the following:

"Never mind that [when asked that Syrians initiated the war from the Golan Heights]. After all, I know how at least 80 percent of the clashes there started. In my opinion, more than 80 percent, but let's talk about 80 percent. It went this way: We would send a tractor to plough someplace where it wasn't possible to do anything, in the demilitarized area, and knew in advance that the Syrians would start to shoot. If they didn't shoot, we would tell the tractor to advance farther, until in the end Syrians would get annoyed and shoot. And then we would use artillery and later the air force also, and that's how it was. I did that, and Laskov and Chara [Zvi Tsur, Rabin's predecessor as chief of staff] did that, Yitzhak did that, but it seems to me that the person who most enjoyed these games was Dado [David Elzar, OC Northern Command, 1964-69]." (Iron Wall, p. 236-237)

"Our American friends offer us money, arms, and advice. We take the money, we take the arms, and we decline the advice." (Iron Wall, p. 316)

and in April 1973 from the peaks of Massada he proclaimed a vision:

"a new State of Israel with broad frontiers, strong and solid, with the authority of the Israel Government extending from the Jordan [river] to the Suez Canal." (Iron Wall, p. 316)