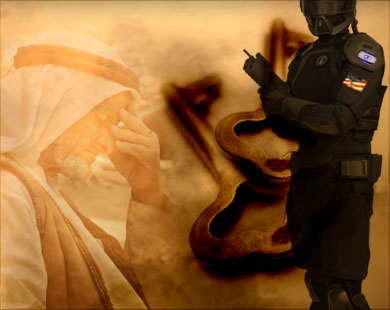 Often Western officials and academics explain the enrollment of the young in militant organizations to social and economical reasons. They believe that since the heads of the family are busy trying to put food on the table, that causes many young to develop psychological and social problems, which explains why many turn to violence and seek revenge from others, or turn to drug dealing and becoming members of criminal gangs that steal and kill. Therefore, they often concluded that improving the economic situation is the key to solving the problems of resorting to violence

As the Palestinian suffering has continued for decades, it has become increasingly difficult for Western politicians to address Palestinians rights, and often they focus on finding a solution to the Palestinian-Israeli conflict without addressing the core issues (such as right of return, ethnic cleansing, dispossession, ..etc.).

Since Palestinians are exhibiting this "violent" phenomena, the West have focused its energy on solving this conflict by improving the economic or living conditions for Palestinians in the occupied territories.

From the beginning, Israel decided to confront Palestinian resistance with an overwhelmingly violent reprisal, however, it did not succeed despite its destructive power. Resistance has increased in quantity and quality to a degree that it is currently scaring many Israelis.

Besides confronting Palestinian resistance, Israel and the Western Governments found it necessary to work also on the economic and financial fronts as well.

The enemies of the Palestinian people resorted to two policies to defeat them: The first aimed to frustrate and depress them by physically defeating their will to resist, and the second policy aimed to entice them with financial gains, and leadership positions within their community.

I am not going to explain these policies in details, the reader

In the early 1980s, silently and carefully there was a search for Palestinian academics who could support such a policy. At the beginning, the environment in the occupied West Bank and Gaza Strip was not yet suitable for such activities.

Some educated Palestinians surfaced who called for talking to the West in a language that they can understand, which was focused mainly on exposing the suffering of the Palestinian people and exposing Israeli atrocities against them.

In the 1980s, they did not speak against resistance, and they did not disclose their intention to recognize Israel, but they focused on

improving the economic conditions as the tool to help the occupied Palestinians, and

they focused their attention on establishing a Palestinian state in the West Bank and Gaza Strip.

I was one of those who were approached to support this policy; even the American consul in Jerusalem offered his cooperation in this regards in 1983, and the Israelis offered to make me a Palestinian leader in 1989.

At the time, American and Israeli policies aimed to refocus the attention of the Palestinian people away from their Right of Return and from their right to self-determination, to establishing a Palestinian state in the West Bank and the Gaza Strip. The Palestinian suffering in the occupied territories was used as the tool to

In return, these Palestinian academics received many benefits from the Israeli occupation, such as traveling abroad, freedom of movement, lecturing abroad, attending conferences, and even financial support in some cases.

To be specific, I mention the Palestinian Media Center, which enjoyed a wide range of activities including financial support from the PLO without any objections or restrictions from the Israeli occupiers. The people who headed this media center were exposed as Palestinian leaders, and the occupiers even harassed them to enhance their political legitimacy among the Palestinian people.

Slowly since 1988, Palestinians started to accept what used to be forbidden, and they even crossed the red lines which they imposed upon themselves earlier. They

After executing the policies of frustrating and financially enticing the Palestinian people, America and Israel turned to restricting Palestinians even more by controlling their sources of income directly or through the Western donor governments.

The goal was, and still is to make the Palestinian people a hostage to the loaf of bread they need to survive; which will turn them away from demanding their national rights and from resisting the Israeli occupation. In other words, the goal is to keep them busy just to survive from day to day, and not even think of their right of return or liberating Jerusalem.

These policies intensified after signing the Oslo Agreement and after the establishment of the Palestinian National Authority (PNA). These policies are rooted on three primary principles:

Nowadays,, if anybody visits the West Bank, he will hear how the cost of living has sky rocketed, however, he hears little about the Israeli colonization policies, usurpation of Palestinian lands, arrests, and assassinations.

In a nutshell, the real goal is to buy Palestinian national rights at a fixed price, set according to Israeli and American dictation. Therefore, any talk about any "peaceful solutions" is meant only to gain time until they completely convert the Palestinian cause into a monthly salary cause. Ironically, this is exactly what Za'ev Jabotinsky advocated as early as 1923 in his famous Iron Wall article, he said:

".... Settlement can thus develop under the protection of a force that is not dependent on the local population, behind an IRON WALL which they will be powerless to break down. ....a voluntary agreement is just not possible. As long as the Arabs preserve a gleam of hope that they will succeed in getting rid of us, nothing in the world can cause them to relinquish this hope, precisely because they are not a rubble but a living people. And a living people will be ready to yield on such fateful issues only when they give up all hope of getting rid of the Alien Settlers. Only then will extremist groups with their slogan 'No, never' lose their influence, and only then their influence be transferred to more moderate groups. And only then will the moderates offer suggestions for compromise. Then only will they begin bargaining with us on practical matters, such as guarantees against PUSHING THEM OUT, and equality of civil, and national rights."

* This article was translated from Arabic which first appeared at AlJazeera.net. Click here to reach Dr. Qasim at his personal website.


Click Here For More Comments
What is new?
-A Survey of Palestine, the official source about Palestine before Nakba produced by the British Mandate; over 1200 pages.