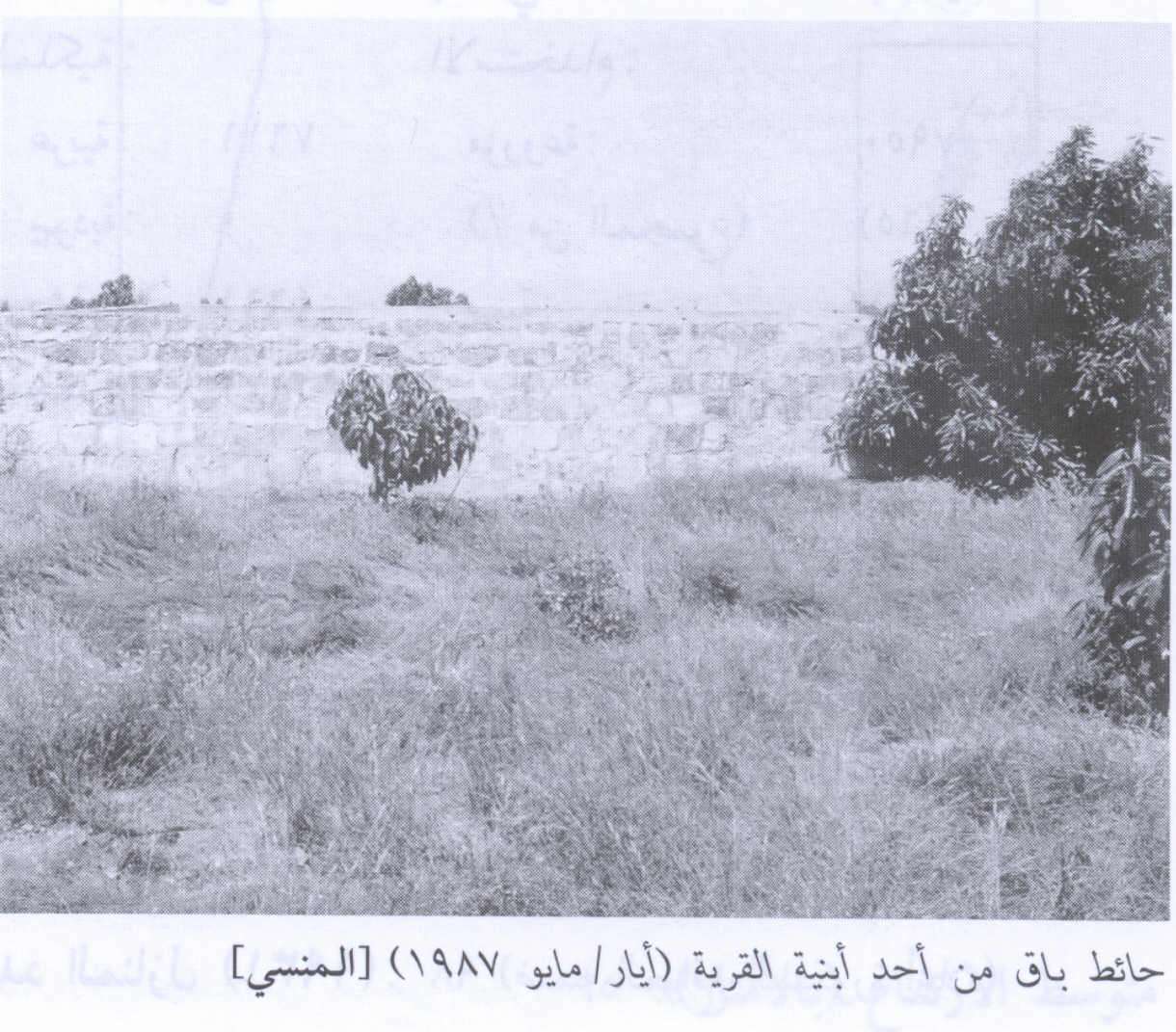 Click Image For Town Details
Al-Mansi: Location and Description
Al-Mansi was situated on the left side of the high way between Jenin and Haifa. It is at equal distance from both cities. In order to lead you to the exact location, you can imagine yourself travelling from Jenin to Haifa. As you start your trip, you will notice that this high way goes all along at the feet of a ridge of hills on your left, with Marj Ben Amer on your right. After going for around 30 kilometers, you will come to a big intersection. Beside this intersection, there is a big square military building. This building is one of the seventy similar buildings which were built during the British Mandate on Palestine directly after the First World War, as military centers and shelters for the British Army, which was deployed in Palestine then. Also these centers were shelters for the soldiers from the German Air Force (Luftwaffe) raids during the Second World War. I even assume that this big building may be used currently as a prison. I am assuming this because I frequently hear about Majiddou Prision and this building is not far away from Tell Majiddou, which has a special historical importance. However, this intersection represents two roads: the road you are travelling by from Jenin to Haifa and another road that goes from Al-Nasra (Nazareth) in the north on your right hand side and Yaffa (Jaffa) on the left. Any way, you cross this intersection going straight ahead with the awareness that Al-Mansi is still ahead, but not far away. After crossing the intersection, the ridge of mountains on your left come so close to the side of the road, to an extent that you find that the road at some places was cut through the mountain rocks. In that place, where the mountains meet the Marj (the plane)and the road runs like a long rope between both there was a natural spring of water on your right hand side at the lower shoulder of the road. There were very big tall trees around that spring. Reaching that spring, means that you have reached Ayn Al-Mansi or what was called Al-Mansi Al-Sharqiyyeh. This village was situated on the left of the high way and its houses were grouped in a style of the one neighborhood. After you cross this place, which looks like a bottle neck, the mountains withdaw back little by little from the road, leaving the traveller to go ahead as if he is travelling in the middle of the Marj on both sides. Now these mountains extend to the west withou being seen by any traveller on the road in the shape of a semi circle. Al-Mansi was originally built at the feet of this ridge of mountains. Houses were scattered in a semi circle, with a few houses inside this semi circle. There were no paved roads to lead to the center of Al-Mansi village. The radius of the aforementioned semi circle may be between 10 to 15 kilometers. Right before the mountains meet the road in front of you, again, and on you left, there were two places that you may see while you are looking on. One of these two things is Al-Mansi school. The building may be in ruins or could be a heap of rubble. Originally, the school was surrounded by a fence of pine trees. There may be some trees up to this moment.The other thing right beside the road on the left and that is Al-Mans's Flour Mill, few meters from the road. The flour mill also could be a heap of rubble or deserted ruins, if the Zionists did not carry the stones away. The mill was originally built in a white rocky place and was surrounded with the white rocks which represent one of the shoulders of wadi al-Gossaib. This wadi originates from inside the village and runs to the Marj where the mountains meet Al-Marj again. Right after you see the Flour Mill there is a bridge built on wadi Al-Gossaib. These mountains that are close to the bridge belonged to Al-Mansi inhabitants. At this point you say "Good bye Mansi" and you will be welcomed to Haifa, in front of you. It remains to be mentioned that Al-Mansi was the last village which belonged to Haifa District on the way to Jenin.
(Please note that the above events and remarks were written by a man, who was only six years of age in 1948. Any corrections, additions or suggestions will be highly appreciated as far as they contribute positively by shedding more light in order to reflect the shere facts.)