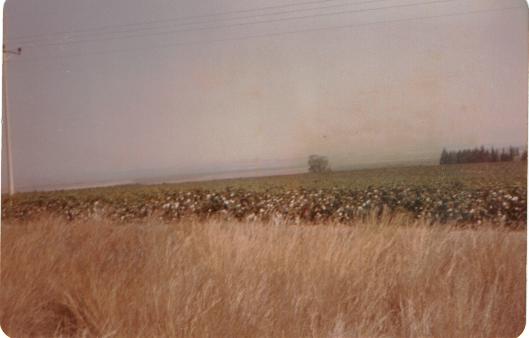 Click Image For Town Details
Life at al-Mansi:
Farming:
Almost all inhabitants of al-Mansi were farmers, who lived there and worked in agriculture. Very few people were employed by the Haifa Refinery. Lands which were cultivated could be classified under three categories:
1- Al-Marj or plane lands:
These pieces of lands depended exclusively on rain. This category included all level plane lands within the village, on the left hand side of the high way between Jenin and Haifa, and the lands in Marj Bin Amer, on the right side of the road. These lands were used for winter or spring crops. Winter crops, are crops which the farmer usually sows in winter like wheat, corn, maze, and barley, lentils and ckeckpeas. Spring crops are those crops which the farmer used to sow in spring like melons, water melons, sunflower, sesame, okra, tobacco, tomatoes and potatoes.
2- The mountains:
Al-Mansi was surrounded by mountains from three sides.These mountains were cultivated and used mainly for growing trees. The farmers used these mountains, which were in most cases behind the houses, for growing olives, vines, almonds, fig trees, plum trees, carob and sometimes peaches trees. In some places, there were some big wild trees such as oaks.
3- Lands which depended on irregation:
These lands were adjacent to natural sources of water. The farmers, those days, could not afford to buy the necessary equipment for complete irrigation systems. Farmers, who had natural springs of water or artisian wells on their lands used small motor pumps to irrigate their small farms which were planted mostly with vegetables. On these lands, the farmer would also grow some fruit trees such as fig trees, cherries, plums, apples and quince trees. Agricultural products were carried to Haifa, the only market for al-Mansi products. The products which were carried to Haifa included only fruit. Vegetable products were never sold. The farmers grew vegetables for their own families use. It was very normal for any inhabitant to come to his neighbor's garden and take whatever vegetables he needed and that was always free of charge.
In addition to farming, most of al-Mansi people kept herds of cattle. Goats, sheep and cows were another source of income for many families. These animals were kept for their dairy products and meat. Dairy products were processed locally by the women and in most cases consumed by the families on daily basis. Only processed cheese sometimes found a way to the market.
Poultry raising was also another important source of food and income, as well. Most families in al-Mansi kept chickens for eggs and meat.
Social Life:
As the village population was not very large, people knew each other very well and there was full cooperation among them. Any one would not be surprized to see this cooperation when the people, for example, would collect their harvests. If it were collecting the olives, then the neighbors would help each other in completing the job for one farmer and then, they would go to help the other and so on. In the case of collecting the wheat harvest, the farmers would not hesitate to help each other. In marriages, the bridegroom's family would erect a big black tent near their house for the guests. Food would be served on such occasions. The food would usually be mansaf with lamb meat.
In cases of sickness, patients were carried on horse back to Haifa high way, where the patient and his companion(s) could catch a cab or a bus to the big city, where medical treatment was available.
In the case of death, almost all al-Mansi inhabitants would stand firmly beside the family which lost one of its beloved members. No man would hesitate to attend the funeral and pay his condolences. In one word, the whole village was like a big family.
(Please note that the above events and remarks were written by a man, who was only six years of age in 1948. Any corrections, additions or suggestions will be highly appreciated as far as they contribute positively by shedding more light in order to reflect the shere facts.)