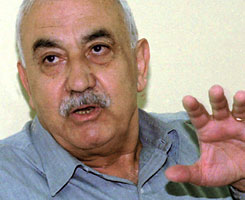 Born into a family of Greek Orthodox merchants, George Habash and his family were forced in July 1948 to leave their native town, LYDDA, in what became one of the most infamous cases of deliberate mass expulsions of Palestinians by the Israeli army. Having fled to Beirut, Habash pursued his studies in pediatric medicine at the American University of Beirut and graduated first in his class in 1951. The same year he was arrested after a demonstration. In 1952, he founded the Arab Nationalist Movement (ANM) with WADI HADDAD (a Palestinian), Ahmad al-Khatib (a Kuwaiti), and Hani al-Hindi (a Syrian).

Determined to spread the movement abroad, Habash opened a Clinic of the People and a school for Palestinian REFUGEES in Amman at the end of 1952. He remained there until 1957 .Active during the events of 1956-57 in Jordan, he went underground in April 1957 after the proclamation of martial law by King Husayn. Convicted in absentia, he fled to Syria after it had joined with Egypt to form the United Arab Republic (UAR).

Attracted like many Arab nationalists to the ideas of Jamal Abd al-Nasir, he looked to extend the influence of the ANM to different Arab countries. For him, contrary to the cadres who formed FATAH, Arab unity was the engine of the liberation of Palestine. The Syrian secession from the UAR in 1961 and the subsequent return of the Ba'th to power in that country forced Habash to take refuge in Beirut. In April 1964, he created, within the ANM, a regional command for Palestine that regrouped the Palestinian members of the organization.

The ARAB-ISRAELI WAR OF 1967 dealt a hard blow to Nasir's prestige and gave affirmation to the Palestinian fedayeen movement. On December 11, 1967, Habash played a key role in the creation of the POPULAR FRONT FOR THE LIBERATION OF PALESTINE (PFLP) and became its secretary-general. The PFLP was a radical leftist and nationalist group opposed to any Arab concession to Israel because Israel was not ready to reciprocate. It was equally uncompromising toward the West and conservative Arab regimes, both of whom, together with Israel, were the enemies of the Palestinian people and their struggle for liberation.

Habash was detained by the Syrian authorities in March 1968, fell out of grace with Wadi Haddad in November 1968, and returned to Amman at the beginning of 1969. During this period a break occurred with the ANM leftists led by NAYIF HAWATIMA. Defending radical positions and rejecting UNITED NATIONS SECURITY COUNCIL RESOLUTION 242 and all attempts at political settlement-notably the ROGERS PLAN -his group pushed toward a confrontation with King Husayn. The hijacking of three planes at the Zarqa airport in September 1970 unleashed the events known as BLACK SEPTEMBER and the expulsion of the fedayeen organizations from Jordan.

When Habash's group took refuge in Lebanon, as did other groups of the PALESTINE LIBERATION ORGANIZATION (PLO), Habash played an active role during the Lebanese civil war (1975-76) on the side of the ANM. After the signing of the CAMP DAVID ACCORDS, he worked to reinforce the unity of the resistance, but, in 1980, he had a grave stroke that left him unable to be involved in political affairs for many months.

Violently opposed to the OSLO AGREEMENTS, Habash contributed to the organization of the Damascus-based opposition, included for the first time Islamist organizations outside the PLO-HAMAS and ISLAMIC JIHAD. Remaining intransigent, affectionately called al-Hakim ("the Doctor" or "the Sage"), George Habash has maintained a great amount of respect among Palestinians, notably for his consistent refusal to align his organization with any Arab regime and for his revolutionary zeal in pursuing his goal of liberating Palestine.

Return to al-Lydd
What is new?
-A Survey of Palestine, the official source about Palestine before Nakba produced by the British Mandate; over 1200 pages.