For years, it has been a staple Zionist propaganda to claim that the Palestinians had left their homes on the order of Arab governments, to clear the way for the victorious entry of the Arab Armies. Khalidi (1988) and Childers have already put this myth to rest (click here to read our rebuttal for this myth too). Not finding any sign of this incitement, Morris (1987) confirmed their conclusion. Moreover, he assessed the reasons for the exodus under different categories, (see Table 7). The results of his assessment applied to his village list are shown in Table 8.
Of 330 villages assessed by Morris, 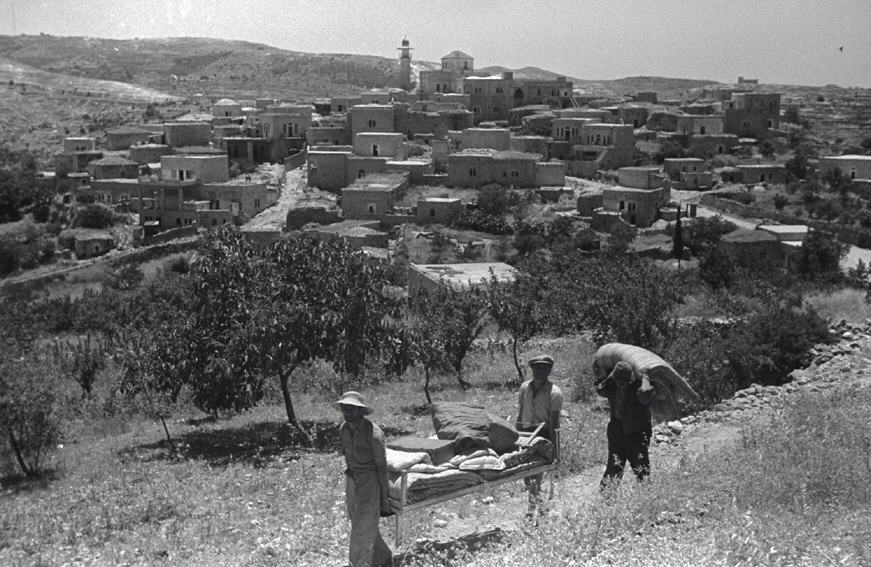 General view of al-Maliha taken during after Nakba, and in the foreground Israeli are looting Palestinian properties
This gives a total of 282 (85% ) villages which were depopulated by direct military action. Extending the same method of assessment to our expanded list of depopulated villages, the respective figure is 442 (89% ) villages.
Another kind of war had equally devastating results. The "Whispering Campaign", by which a Jewish friend advises the villagers to leave or else face a terrible fate, resulted in the depopulation of 12 villages. Thirty-eight more were ethnically cleansed due to "fear of Jewish attack". This makes 50 (10%) villages.
Five villages (1%) left on orders of a local leader or a village headman. Thirty-five villages could not be determined.
Semantics aside, it is clear that the ethnic cleansing of the Palestinians, hence the creation of the so-called "refugee problem", is the direct result of a total war waged against the Palestinians by the Israelis during and after the Mandate, using military and psychological means. That was meant to give credence to the slogan: Palestine is a land without people.  (click here to read our rebuttal for this myth)