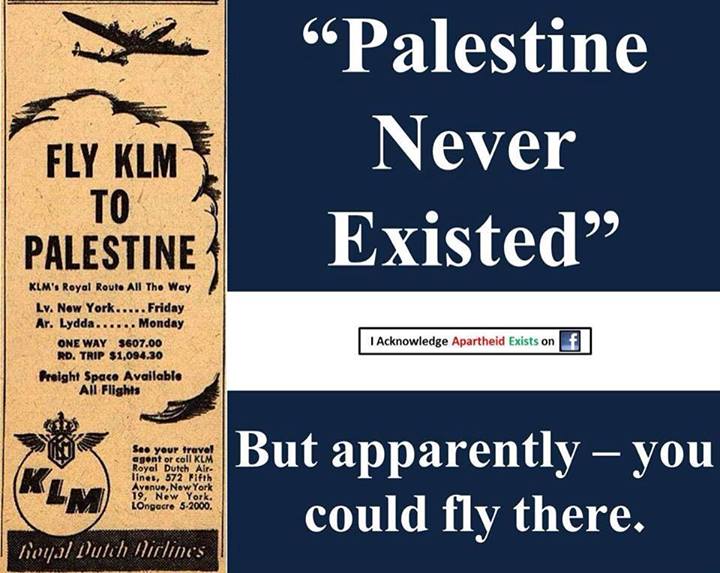 Dear Zionist Jews: KLM will fly you to nowhere from NY City for $607 only!
From the early stages of Zionism to the present, Zionists have propagated the myth that the most important land-bridge in human history (Palestine) has been empty and destitute for two thousand year until it was later developed by the Israeli Jews. To facilitate such disinformation, the Zionists adopted the following slogan to entice European Jewry to emigrate to Palestine:

"A land with no people is for a people with no land".

Had the Zionist leadership admitted the existence of an indigenous people, then they would have been obliged to explain how they intended to displace them. To disprove this baseless myth, let's quote Ben-Gurion (the first Israeli Prime Minister) who stated as early as 1918 that "Palestine is not an empty country". According to Shabtai Teveth (one of Ben-Gurion's official biographers), Ben-Gurion stated in an article published in 1918 that:

"Palestine is not an empty country . . . on no account must we injure the rights of the inhabitants."

Ben-Gurion often returned to this point, emphasizing that Palestinian Arabs had "the full right" to an independent economic, cultural, and communal life, but not political. (Shabtai Teveth, p. 37-38)

To destroy this baseless myth, click here to view a page that was scanned from a book which was conceived and edited by Ben-Gurion himself, stating that Jews made up 12% of the total Palestinian population as of 1914. It's not only that the majority of the Jews in Palestine were not Zionists (by Ben-Gurion's own admission), but they were also not even citizens of the country since many had recently fled anti-Semitic Tsarist Russia.

As the Ottoman census records show Palestine was widely inhabited in the late 19th and early 20th century, especially in the rural areas where agriculture was the main profession. According to Justine McCarthy (p. 26), an authority on the Ottoman Turks, Palestine's population in the early 19th century was 350,000, and in 1914 Palestine had a population of 657,000 Muslim Arabs, 81,000 Christian Arabs, and 59,000 Jews (including many European Jews from the first and second Aliyah).

So the Jewish population in Palestine as of 1914 were under 8% of the total population, which was much smaller than the Palestinian Christian Arab population. It should be noted that our source, Justine McCarthy was quoted by many Israeli Jewish scholars like Benny Morris and Tom Segev. In that regard, it's worth quoting one of the most ardent Zionists, Israel Zangwill, who stated as early as 1905, that Palestine was twice as thickly populated as the United States. He stated:

"Palestine proper has already its inhabitants. The pashalik of Jerusalem is already twice as thickly populated as the United States, having fifty-two souls to the square mile, and not 25% of them Jews ..... [We] must be prepared either to drive out by the sword the [Arab] tribes in possession as our forefathers did or to grapple with the problem of a large alien population, mostly Mohammedan and accustomed for centuries to despise us." (Righteous Victims, p. 140 & Expulsion Of The Palestinians, p. 7-10) 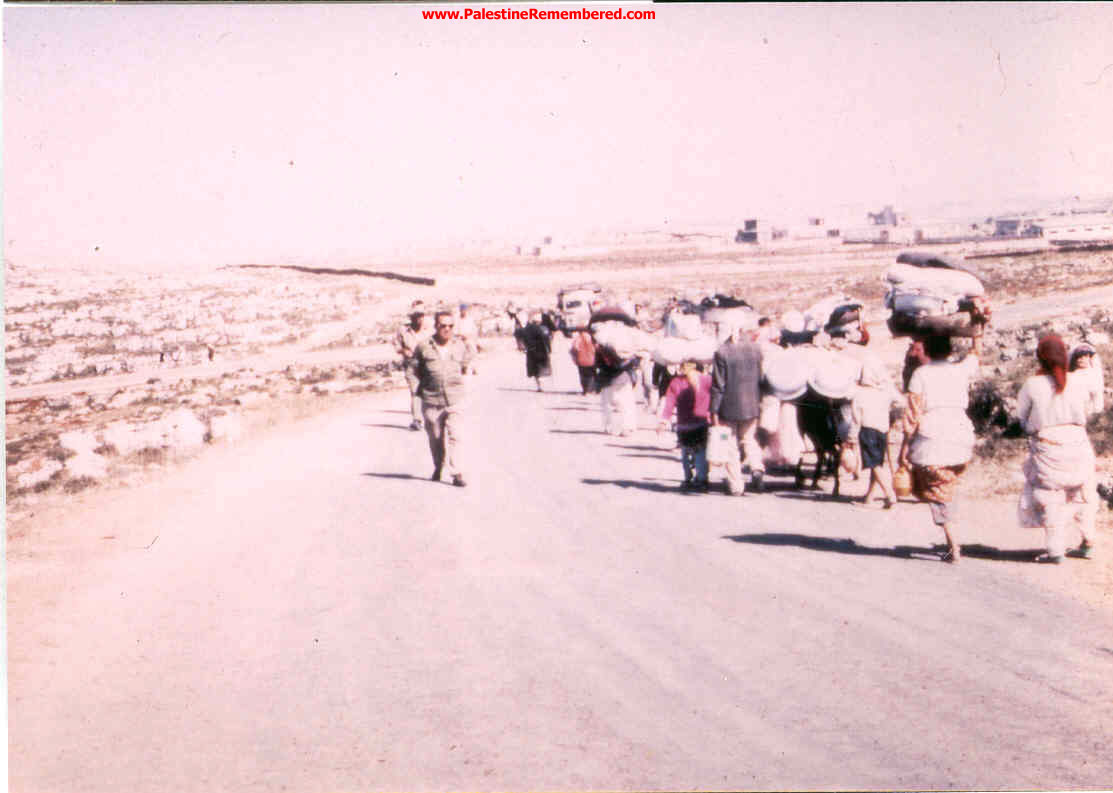 'Imwas June 1967, Palestinian civilians being ethnically cleansed; note the Zionist Jewish officer on the left!
In other words, Palestinians were recognized by the Zionist leadership as "humans" who populated Palestine, however, that was not good enough of a reason to "grant" them the same political rights as Jews, who mostly lived outside of Palestine. Consequently, this ideology was the prelude to the wholesale DISPOSSESSION and ETHNIC CLEANSING of the Palestinian people during the 1948 war.

Soon after the first Zionist Congress in Basel (Switzerland) in 1897, a Zionist delegation was sent to Palestine for a fact finding mission, and to explore the viability of settling Palestine with persecuted European Jews. The delegation replied back from Palestine with a cable that stated:

"The bride is beautiful, but she is married to another man." (Iron Wall, p. 3)

Despite that many Zionists were aware of this happy marriage as early as 1897, they have deliberately chosen to terminate this relationship since they think that Jewish rights are more important than Palestinian rights. The forcible divorce of Palestine from its indigenous people was eloquently articulated by Ze'ev Jabotinsky, the founder of the Israeli political Right, in 1926 who explained that:

" ... the tragedy lies in the fact the there is a collision here between two truths .... but our justice is greater. The Arab is culturally backward, but his instinctive patriotism is just as pure and noble as our own; it cannot be bought, it can only be curbed ... force majeure."(Righteous Victims, p. 108)

The questions which beg to be asked are these: 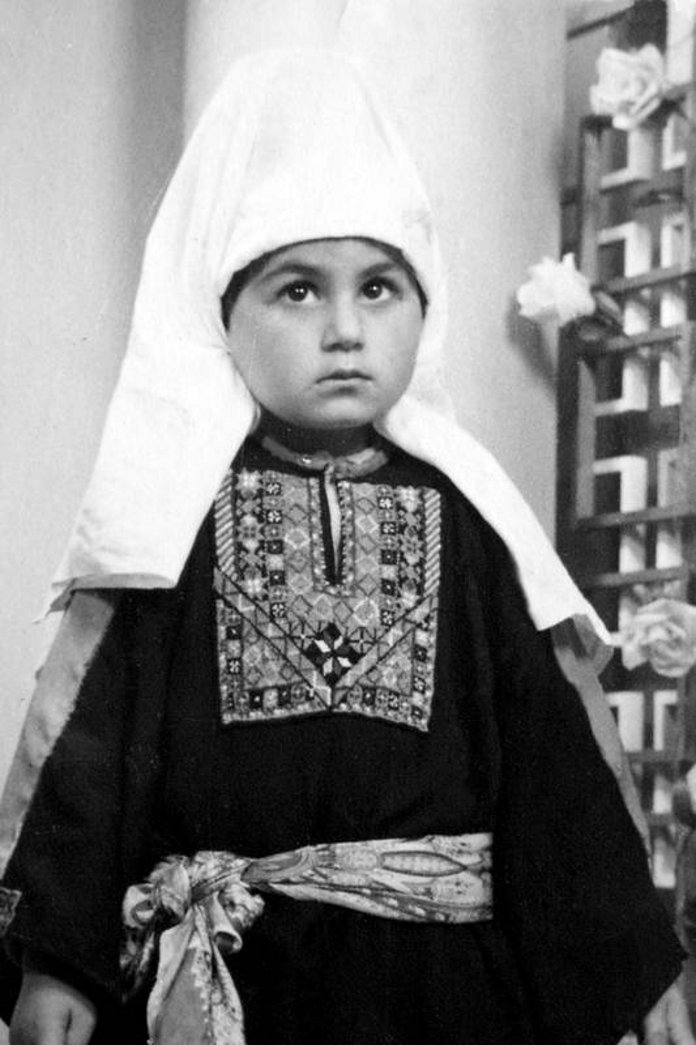 Pre-Nakba picture of a Palestinian Chrisitian girl from Bethlehem who "doesn't exist"; Zionists say!
What makes many Zionists dangerous over time is that they start believing their own propaganda. For example, Benjamin Netanyahu, Israel's Prime Minister between 1996-1998, proposed lately that Israel should never relinquish control over the occupied West Bank and Gaza Strip since he claims that the local population are the descendents of non-indigenous Palestinians. He also alleged that these people came to look for employment that was generated by the influx of new European Jewish capital. Yehoshua Porat, a Hebrew University professor, refuted the late Prime Minister in an article published in Ha'aretz Daily, click here to read his rebuttal. It's worth noting that Professor Porat worked for the campaign to elect Benjamin Netanyahu in 1996, so it might not be a good idea to call him Netanyahu hater. Moreover, it should be noted that all Zionist investments in Palestine required employing Jewish labor as decreed by the Jewish National Fund's racist bylaws (United Nations: The origins of the Palestine problem). In other words, the primary beneficiary of Zionist investment were Jewish immigrants, and not the Palestinian native population.

It's really amusing that while nearly all Israelis and Zionists believe that Hawaii, Jordan, Lebanon, Syria, Tahiti, and Iraq were all populated by indigenous people prior to WW I, however, they find it extremely difficult to imagine that the "Promised Land" (one of the most strategic areas in the world) had any indigenous people whatsoever. It's as if the "Promised Land" had been waiting for over 2,000 years for Israelis and Zionists to settle it and make it bloom, click here to read our response to this argument.

Finally, it's not only that Palestine enjoyed a strategic commercial location (being the land bridge between Asia and Africa), its lands were also fertile and planted with all sorts of trees a long time before the Zionists came to its shorelines. So to claim that Palestine had no people until the Zionists came to settle it, is an absurd claim. Sadly, many Israelis and Zionists hate the idea of an indigenous Palestinian people to the point that they've created a fictitious world based on illusion. In that respect, the Palestinian people have a simple message: Over 8.5 million Palestinians are not going away. The sooner the Israelis and Zionists understand this simple message, the faster they will wake up from their delusional coma.