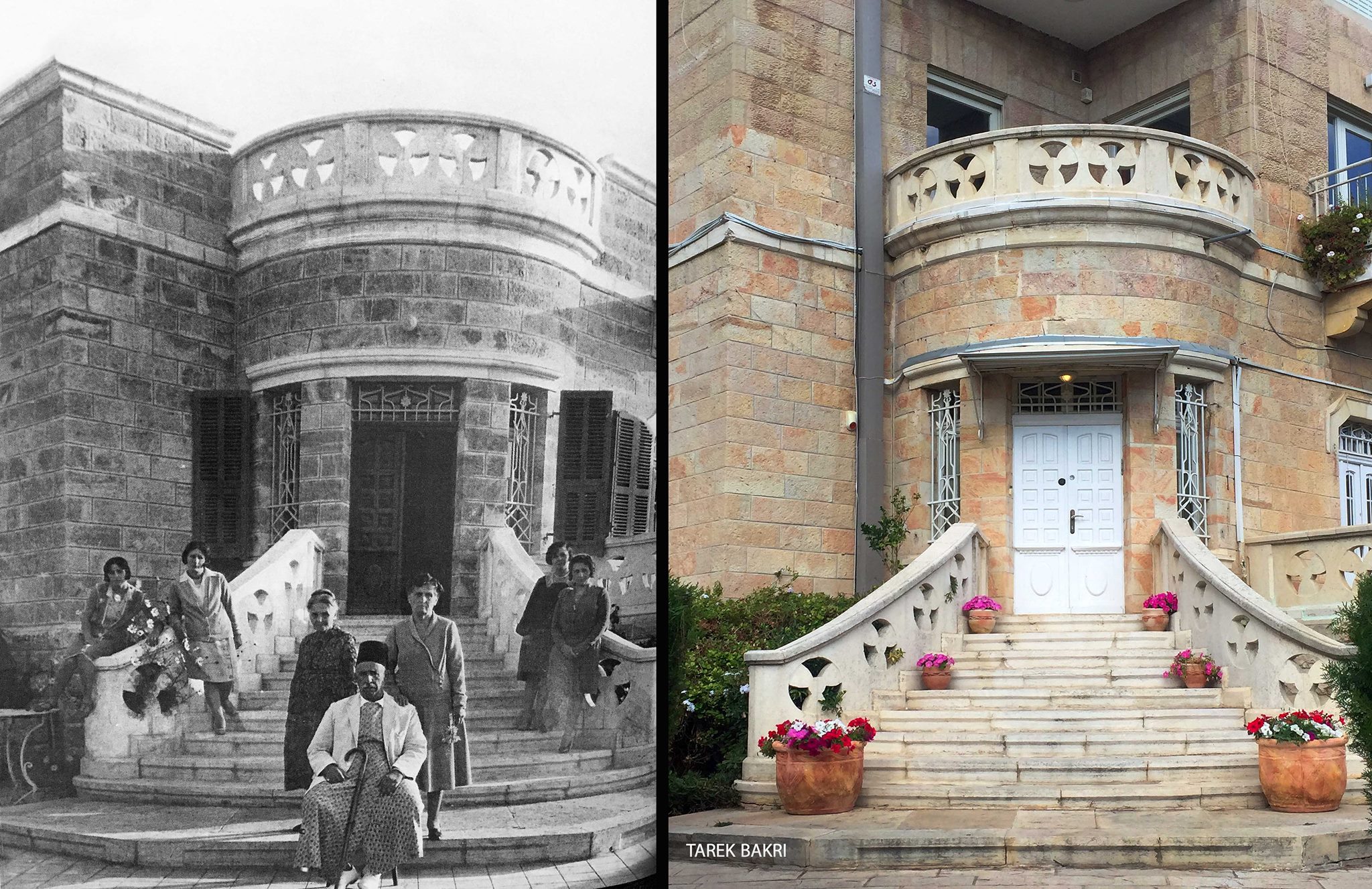 Shukri al-Jamal's Palace in Talibiya neighborhood in Jerusalem two days after its completion and just before Zionist Jews looted it from him and his family
Soon after the Israeli invasion, there was an orgy of plunder and looting in which official bodies and individual Jews competed for the biggest prizes. Fifty thousand Arab homes were looted and the Custodian of Enemy Property lamented that "he could only register 509 carpets in his inventory". The rest had been looted on the way. Women were raped, killed and their fingers cut-off for rings (Segev, p.86).
Ben Gurion, not unaware of this, recorded in his War Diary, (10 February 1948, robbing the Arabs; 1 May, complete looting of Wadi Nisnas, Haifa; 17 June, looting in Jerusalem; 15 July, the terrible question of looting and rape ...etc.). In the words of the Jewish writer, Moshe Simlansky: "The (Jewish) people were gripped by a frenzy of looting; individuals, groups, men, women and children. They descended like vultures on the spoils: doors, windows, clothes, tiles .." (Segev p.88). But the biggest prize was Lydda and Ramla whose 60,000 inhabitants were expelled at gunpoint. "The IDF loaded 1,800 trucks

from Lydda alone." (Segev p. 85). "An officer took his 5th Battalion to al-Ramla for looting" (Ben Gurion War Diary, 15 July). Ben Gurion visited the two conquered towns and was shown the spoils. He noted in his Diary on 20 July, "I saw fabulous wealth, we must save it before it is too late." The competition among government bodies, and individual looters for the possessions of the ethnically cleansed Palestinians was great. High-ranking Mapai leaders, it was claimed, received: "90% of abandoned property", (Segev, p.98).
At one point, the Custodian of Enemy Property reported he could not cope with keeping track of the plunder. He recorded in his Register at one point: "45,000 houses, 7,000 shops, 500 workshops, more than 1,000 stores." In addition, he had to attend to picking the harvest, and feeding the chicken and sheep. He also complained that: "thieves and crooks" were among his staff (Segev p.87, Ben Gurion, p.628). 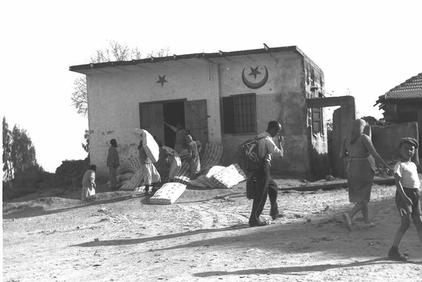 Looting Aqir by newly arrived persecuted European Jewish refugees, 1948
What could not be carried away was burnt. The "burning of the crops" started as early as May 1948, which was the harvest time. It was first applied to the wheat fields in the Negev (Morris 1990, p. 181 ).
Later, the crops were harvested to compensate for Israel's shortage of food. Economic war, in addition to the military war, was waged against the Palestinians, by cutting off food and water (Pappe, p.95). The first step which the Israelis took after the expulsion of the Palestinians is to prevent their return. A policy was created to demolish the houses to remove the traces of the villages, poison the wells, burn the crops to prevent harvesting and shoot at sight any villager seen returning to recover some of his belongings.
Yosef Weitz, the originator of the "Transfer" policy to remove the Palestinians out of their land, began to distribute their land and property among the Jews. Under his policy, there was no place for the Palestinians in the new state. That was also Ben Gurion's basic policy. He is quoted to have said, as late as October 1948: "The Arab of Eretz Israel (i.e. the Palestinians) -they have but one function left, to run away", (Morris, 1990, p.89).

The destruction of the villages started first along the Tel-Aviv-Jerusalem Corridor and the Tel-Aviv-Haifa highway, then spread to Jewish concentration areas around them. Many of the Palestinian dwellings, in towns and less so in villages, were used to accommodate Jewish immigrants. Judging by the gap between the number of new immigrants and the capacity of the new housing being feverishly built for them, it is estimated that about 350,000 Jews have been so conveniently housed in the early fifties. In 1949 alone, Ben Gurion reported that 160,000 newcomers have been housed in Palestinian homes (Segev p.91). 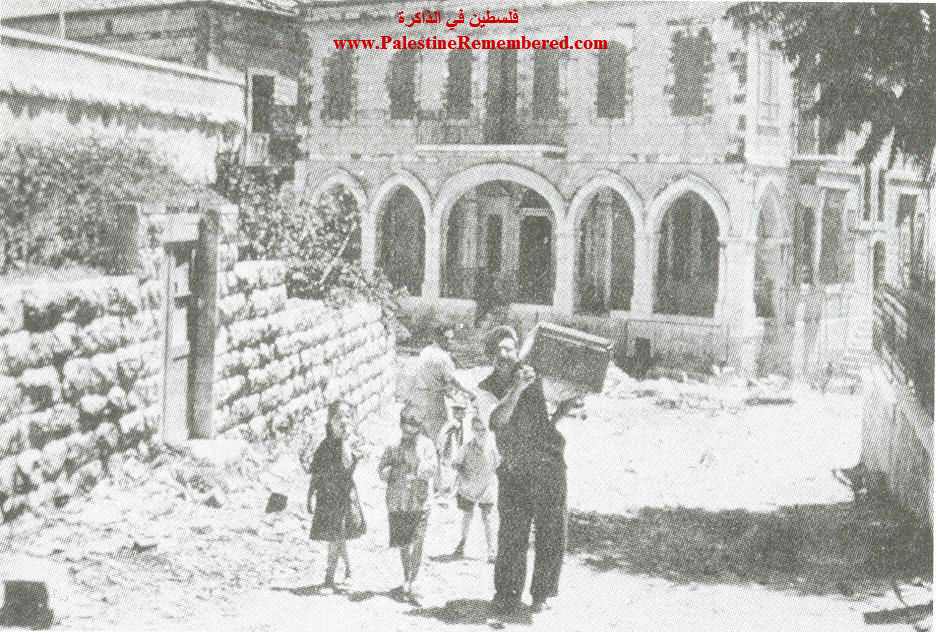 Israeli Jews looting al-Musrara Palestinian Quarter, Jerusalem 1948
The destruction was meant to create a new reality, i.e. to show there is no home to return to. The Israelis assumed that the farmers, who had lived there since time immemorial, can only recognize their villages by the houses, by the ancient trees, and by ravines and roads. Houses were, therefore, systematically destroyed, trees were cut, and other features leveled and ploughed over. The bulldozers came immediately in the trail of the advancing tanks.
Through a careful field survey, Falah (1996) examined the present status of Khalidi's 418 villages (excluding towns). His results are as follows: