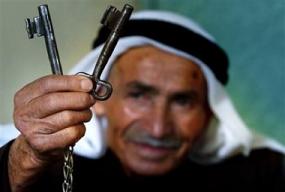 We have compiled the most complete mapping of Palestine ever (over 6,000 placemarks have been identified). Our presentation includes the following:

As you view our presentation, PLEASE NOTE that your journey will be more enjoyable when you click on each identified placemark, a window will pop-up containing all sorts of information about the town including a picture if one is available, number of refugees, lands sizes, occupation date, ...etc.

At PalestineRemembered.com 's lab, we have built a unique software (currently in beta release) that allows you to add placemarks (via Google maps). Daily, the software compiles all newly added placemarks to the the over all listing, so we appreciate you participation and feedback.

As of now, we are double checking these coordinates (including the destroyed villages) for accuracy using Atlas of Palestine's aerial view of Palestine before Nakba, published CIA maps, and other sources. We have made our best effort to verify and double check these coordinates from multiple sources, so by no means we claim 100% accuracy. In that respect, we appreciate pointing any discrepancies.