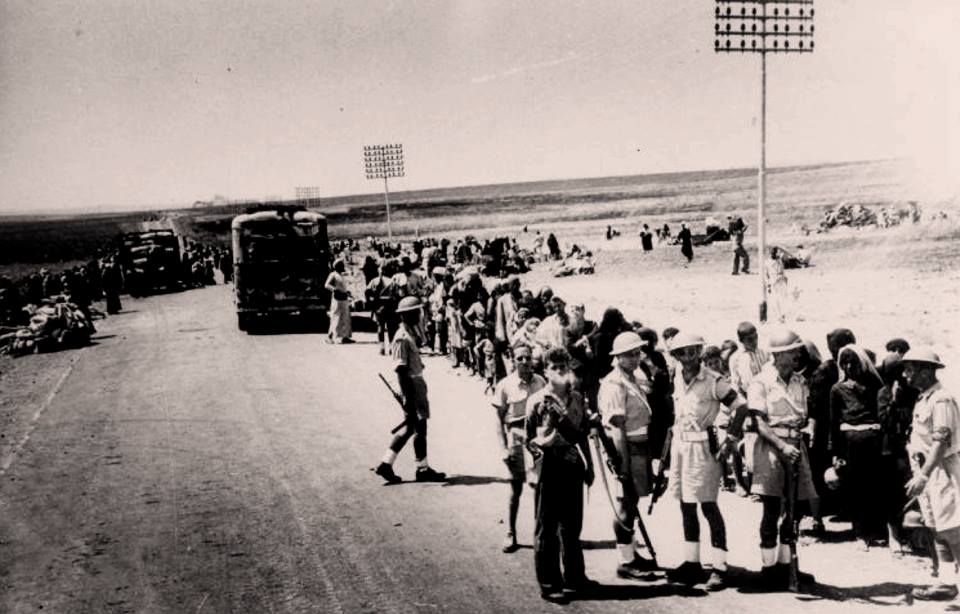 Palestinian are being ethnically cleansed out of al-Ramla & al-Lydd in July 1948 by Zionists Jewish forces as you see based on direct orders from Ben-Gurion, and executed by Yitzhak Rabin
Upon Lydda's and Ramla's occupation on July 11-12, 1948, the Israelis were surprised to find that over 60,000 Palestinian civilians didn't flee their homes. Subsequently, Ben-Gurion ordered the wholesale expulsion of all civilians (including man women, children, and old people), in the middle of the hot Mediterranean summer. The orders to ethnically cleanse both cities were signed by the future Prime Minister of Israel, by Yitzhak Rabin. Many of the refugees died (400+ according to the Palestinian historian 'Aref al-'Aref) from thirst, hunger, and heat exhaustion after being stripped of their valuables on their way out by the Israeli soldiers.

From the quotes below, it shall be conclusively proven that the Palestinian version of the events (especially in the cases of Lydda and Ramla) is the true version. It should be noted the Zionist account of this war crime was intentionally suppressed until Yitzhak Rabin reported it in his biography and in a New York Times interview (which was censored in Israel at the time), however, it was later confirmed in the declassified Israeli and Zionist archives.

Yitzhak Rabin wrote in his diary soon after Lydda's and Ramla's occupation on 10th-11th of July 1948: 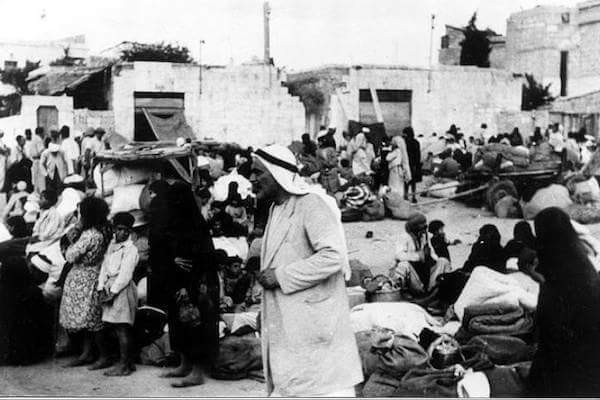 Palestinian are being ethnically cleansed out of al-Ramla & al-Lydd in July 1948 by Zionists Jewish forces on direct orders from Ben-Gurion, and executed by Yitzhak Rabin
"After attacking Lydda [later called Lod] and then Ramla, .... What would they do with the 50,000 civilians living in the two cities ..... Not even Ben-Gurion could offer a solution .... and during the discussion at operation headquarters, he [Ben-Gurion] remained silent, as was his habit in such situations. Clearly, we could not leave [Lydda's] hostile and armed populace in our rear, where it could endangered the supply route [to the troops who were] advancing eastward.
Ben-Gurion would repeat the question: What is to be done with the population?, waving his hand in a gesture which said: Drive them out! [garush otam in Hebrew]. 'Driving out' is a term with a harsh ring, .... Psychologically, this was on of the most difficult actions we undertook". (Soldier Of Peace, p. 140-141 & Benny Morris, p. 207) .

Later, Rabin underlined the cruelty of the operation as mirrored in the reaction of the soldiers, he stated during an interview (which was censored in Israeli publications) with David Shipler from the New York Times on October 22, 1979:

"Great Suffering was inflicted upon the men taking part in the eviction action. [They] included youth-movement graduates who had been inculcated with values such as international brotherhood and humaneness. The eviction action went beyond the concepts they were used to. There were some fellows who refused to take part. . . Prolonged propaganda activities were required after the action . . . to explain why we were obliged to undertake such a harsh and cruel action." (Simha Flapan, p. 101)

It should be noted that just before the outbreak of the war in 1948, the residents of the two cities, Lydda and Ramla, constituted close to 20% of the total urban population in central Palestine, including Jewish Tel-Aviv. Currently, these people and their descendants number nearly half a million, and they mostly live in deplorable refugee camps around Amman (Jordan) and Ramallah (West Bank). Based on Rabin's personal account of events, the decision to ethnically cleanse the two cities was not an easy one, however, that did not stop him from giving a similar order, 19 years later, to ethnically cleanse and destroy the villages of 'Imwas, Yalu, and Bayt Nuba. The exodus from these cities was portrayed firsthand by Ismail Shammout, the renowned Palestinian artist from Lydda, click here to view his exodus gallery. Similarly, Mr. Youssif Munayyer have a written on this subject part of the 64 anniversary of Nakba in an OP-ED article to the NY Time, click here for details

On July 24, 1948 the Mapai Center held a full-scale debate regarding the Palestinian Arab question against the background of the ethnic cleansing of Ramla and Lydda. The majority apparently backed Ben-Gurion's policies of population transfer or ethnic cleansing. Shlomo Lavi, one of the influential leaders of the Mapai party, said that:

"the ... transfer of the [Palestinian] Arabs out of the country in my eyes is one of the most just, moral, and correct that can be done. I have thought of this for many years." (Expulsion Of The Palestinians, p. 192)

When the First Truce ended, Operation Dani headquarters (near Ramle and Lydda) informed the Israeli General Staff on July 10 1948:

"a general and considerable [civilian] flight from Ramle. There is great value in continuing the bombing." During the afternoon, the headquarters asked the General Staff for renewed bombing, and informed one of the brigades: "Flight from the town of Ramle of women, the old, and children is to be facilitated. The [military age] males are to be detained." (Benny Morris, p. 204) 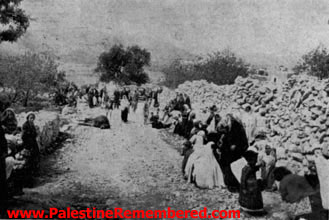 Palestinian are being ethnically cleansed out of al-Ramla & al-Lydd in July 1948 by Zionists Jewish forces on direct orders from Ben-Gurion, and executed by Yitzhak Rabin
Soon after the Lydda massacre was carried out by the Israeli Army Yiftah Brigade on July 10, 1948, Mula Cohen (the brigade's commander) wrote of his experience when expelling the 50,000-60,000 Palestinians who inhabited Ramle and Lydda:

"There is no doubt the Lydda-Ramle affair and the flight of the inhabitants, the uprising and the expulsion [geirush in Hebrew] that followed cut deep grooves in all who underwent [these experiences]." (Benny Morris, p. 206)

Yitzhak Rabbin, the commander of Operation Dani in Ramle area, communicated the following explicit orders at 1:30 PM on July 12, 1948 to Yiftah Brigade (see above quote):

"1. The inhabitants of Lydda must be expelled quickly without attention to age. They should be directed towards Beit Nabala. Yiftah [Brigade headquarters] must determine the method and inform [Operation] Dani HQ and the 8th Brigade.
2. Implement immediately." The order was signed "Yitzhak R[abin]." A similar order, concerning Ramle, was apparently communicated to Kiryati Brigade headquarters at the same time. (Benny Morris, p. 207)

On July 16 1948 Aharon Cizling, the 1st Israeli Agriculture Minister, cautioned the Israeli cabinet (a few weeks after the ethnic cleansing of 60,000 people from Lydda and Ramla):

"We are embarking on a course that will most greatly endanger any hope of peaceful alliance with forces who could be our allies in the Middle East .... Hundreds of thousands of [Palestinian] Arabs who will be evicted from Palestine, even if they are to blame, and left hanging in the midair, will grow to hate us. If you do things in the heat of the war, in the midst of the battle, it's one thing. But if after a month, you do it in cold blood, for political reason, in public, that is something altogether different." (Expulsion Of The Palestinians, p. 191)

And on the same subject, Cizling also said during a Cabinet meeting:

"I have to say that this phrase [regarding the treatment of Ramla's inhabitants] is a subtle order to expel the [Palestinian] Arabs from Ramla. If I'd receive such an order this is how I would interpret it. An order given during the conquest which states that the door is open and that all [Palestinian] Arabs may leave, regardless of age, and sex, or they may stay, however, the army will not be responsible for providing food. When such things are said during actual conquest, at the moment of conquest, and after all that has already happened in Jaffa and other places. . . . I would interpret it as a warning: save yourself while you can get out." (1949, The First Israelis, p. 27) 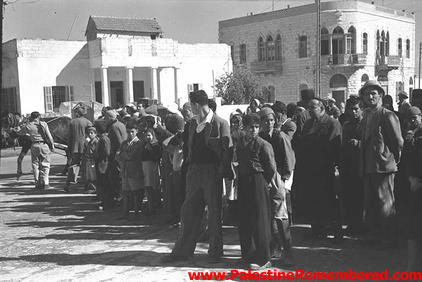 Palestinian are being ethnically cleansed out of al-Ramla & al-Lydd in July 1948 by Zionists Jewish forces on direct orders from Ben-Gurion, and executed by Yitzhak Rabin
And also went on to describe his dismay at the looting of the Palestinian Ramla City (but not at the raping of Palestinian women), Cizling stated:

". ..It's been said that . 'there were cases of rape in Ramla. I can forgive rape, but I will not forgive other acts which seem to me much worse. When they enter a town and forcibly remove rings from the fingers and jewelry from someone's neck, that's a very grave matter. ... Many are guilty of it." (1949, The First Israelis, p. 71-72)

All the Israelis who witnessed the events agreed that the expulsion of the inhabitants of Lydda and Ramle, under the hot July sun, was an extended episode of suffering for the Palestinian refugees, especially those from Lydda. Some were stripped by Israeli soldiers of their valuables as they left the town or at checkpoints along the way. An Israeli archeologist, known by Guttman, subsequently described the trek of the Palestinian refugees out of Lydda:

"A multitude of inhabitants walked one after another. Women walked burdened with packages and sacks on their heads. Mothers dragged children after them . . . Occasionally, warning shots were heard . . . Occasionally, you encountered a piercing look from one of the youngsters . . . in the column, and the look said: We have not yet surrendered. We shall return to fight you." For Guttman, an Israeli archeologist, the spectacle conjured up "the memory of the exile of Israel [a the end of the Second Commonwealth, at Roman hands.]" (Benny Morris, p. 207)

A Palmach (the Israeli strike force) report, probably written by Yigal Allon soon after Operation Dani, stated that the expulsion of the Lydda and Ramla Palestinian inhabitants, besides relieving Tel Aviv of a potential, long-term threat, had:

"clogged the routes of the advance of the [Transjordan Arab] Legion and had foisted upon the Arab economy the problem of "maintaining another 45,000 souls . . . Moreover, the phenomenon of the flight of tens of thousands will no doubt cause demoralisation in every Arab area [the refugees] reach . . . This victory will yet have great effect on other sectors." (Benny Morris, p. 211 & Israel: A History, p. 218)

And in response to report above, the Israeli MAPAM party co-leader, Meir Ya'ari, criticized Allon's use of tens of thousands of Palestinian refugees to achieve a military strategic goal, he stated:

"Many of us are LOSING their [human] image . . How easily they speak of how it is possible and permissible to take women, children, and old men and to fill the road with them because such is the imperative of strategy. And this we say, the members of Hashomer Hatzair, who remember who used this means against our people during the Second World] war. . . . I am appalled." (Benny Morris, p. 211)