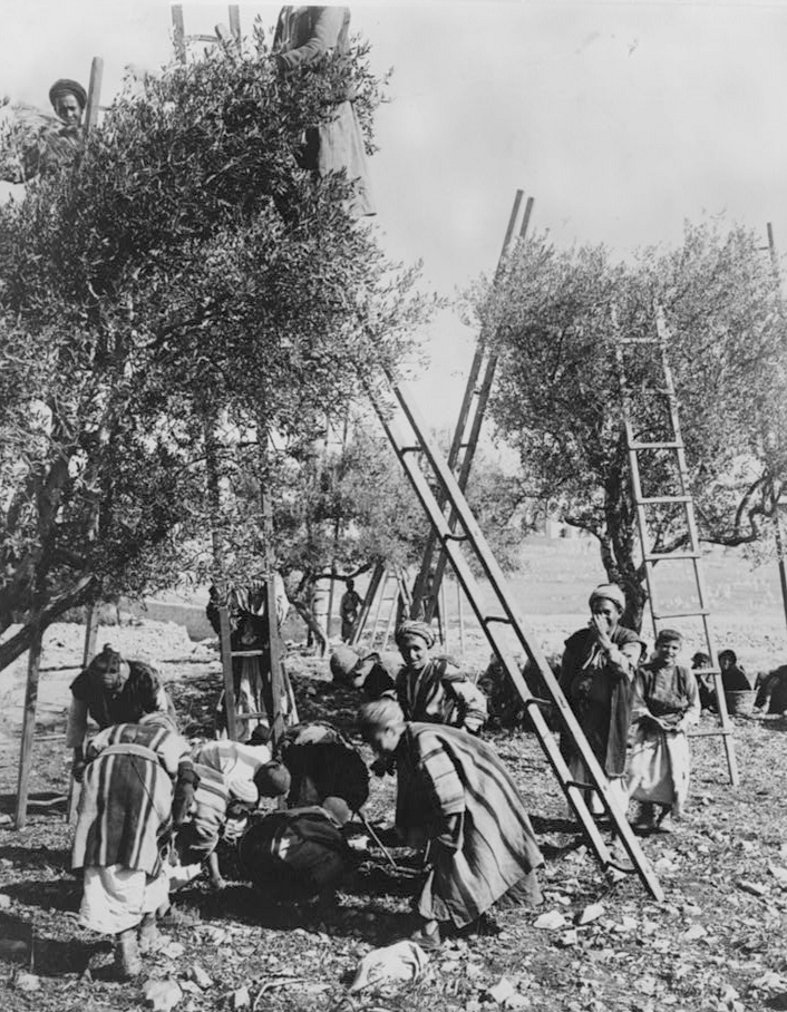 Harvesting olives in Ramallah's hills, early 1900s
From the early stages of Zionism to the present, Zionists have propagated the myth that the most important land-bridge in human history (Palestine) has been empty and destitute for two thousand year until it was later developed by the Israeli Jews. As it will be proven below based on British Mandatory statistical books and other sources, this myth about Palestine and its people was concocted to romanticize the "Jewish return and redemption of the Promised Land". Soon you shall find that what was destitute in 1948, still destitute which is a fact that can be easily proven by using Google's Satellite view. Let's get a detailed accounting of the agricultural production in Palestine for the season of 1944-1945, we will directly quote the British Mandate (who prepared two volume books, titled Survey of Palestine, for the United Nations in 1946-7) as follows:

Source: Survey of Palestine, prepared by the British Mandate for the United Nations, p. 323-327
* Value in Palestinian Pound
** Non-citrus fruits. Note Citrus production=248,274 dunums of which 120,897 dunums were Jewish owned (Supplement to Survey of Palestine, p. 37)
*** One Dunum = 1,000 sq. meters.
Click here to view the exact scanned pages from Survey of Palestine that we extracted the data was from.

Let's contemplate the following lands statistics about Palestine (based on CIA's WorldFact Book) before we draw any conclusions. 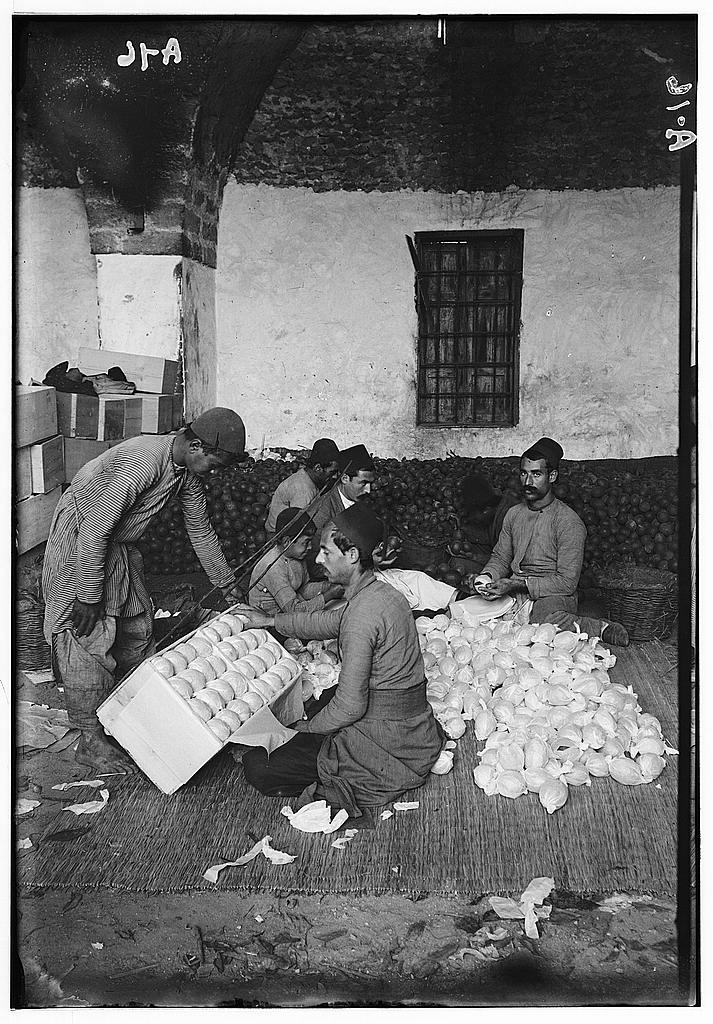 Boxing Jaffa's famous oranges 1898-1914.
Based on these statistics, it is clear that the indigenous population planted 13 times more than newly immigrated European colonizers, which explains why the majority of them preferred to work in the services and manufacturing industries. It should be emphasized that the Jewish Agency and the Jewish National Fund provided lots of subsidies and incentives (such as free consultation, loans, and attractive long term lease programs) to encourage Jews to "redeem" the land. On the other hand, Palestinian agriculture was profitable and sustainable without any assistance from the local government.

It should be emphasized that Jews owned under 7% of Palestine of which only 44% was used for agricultural purposes by Jews (click here to see the exact scanned page from Survey of Palestine p. 376). In this regards, we ask the reader how could this myth be true if Jews cultivated under 3% of Palestine?

Soon after Nakba, the victorious Jews destroyed most of the usurped Palestinian farms and groves, especially olive and orange groves that required extensive labor to maintain and harvest. In this regards, it is worth quoting the Israeli Zionist writer Meron Benvenisti who described the Palestinian landscape soon after Nakba as follows:

"The destruction of hundreds of thousands of dunums of fruit-bearing trees does not fit Israel's self-image as a society that knows how to make the desert bloom. And the contention that the green Arab landscape had been destroyed because of necessity of adopting the crops to the agricultural practices of the Jews only underscores the conclusion it was not the war that had caused this devastation, but rather the disappearance of the specific human community that had shaped the landscape in accordance with its needs and preferences. The destruction of vast areas of orchards did not attract the same degree of interests as had the demolition of the Arab villages, despite the fact that it perhaps had more devastating effect on the landscape." (Sacred Landscape, p. 165) Click here to read more about this subject.

Let's analyze this concocted myth from another angle by comparing the current Israeli and Lebanese agricultural production. Based CIA's online Worldfact Book, we have collected the following data for year 2006: 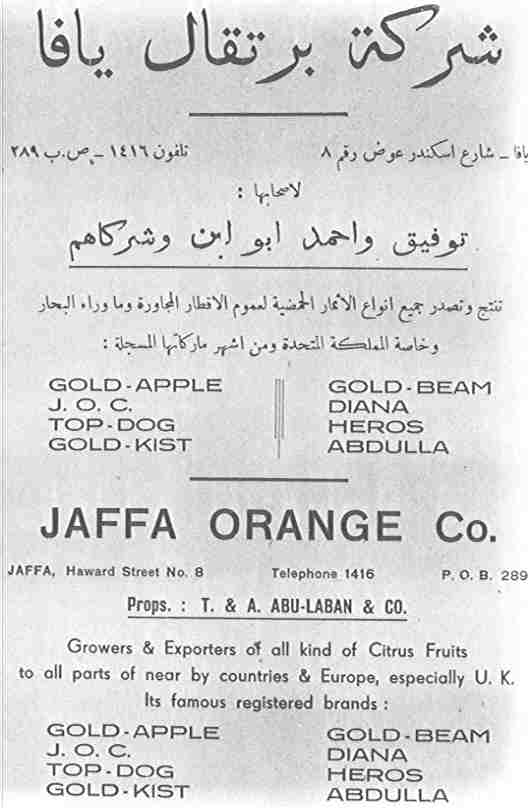 Jaffa Orange Company, looted by Zionist Jews
After adjusting Lebanon's statistics to reflect the size difference (in arable land size and demographics) compared to Israel's, Lebanon's agricultural production becomes $2.8 billion, which is little short of Israel's ($3.64 billion). While contemplating these facts, it's also worth noting the following facts about both countries:

In other words, since the Lebanese and Palestinian societies were very similar in many areas, then it's easy to conclude that Palestinians would have produced as much as the Lebanese if it wasn't for their dispossession by the Israelis. 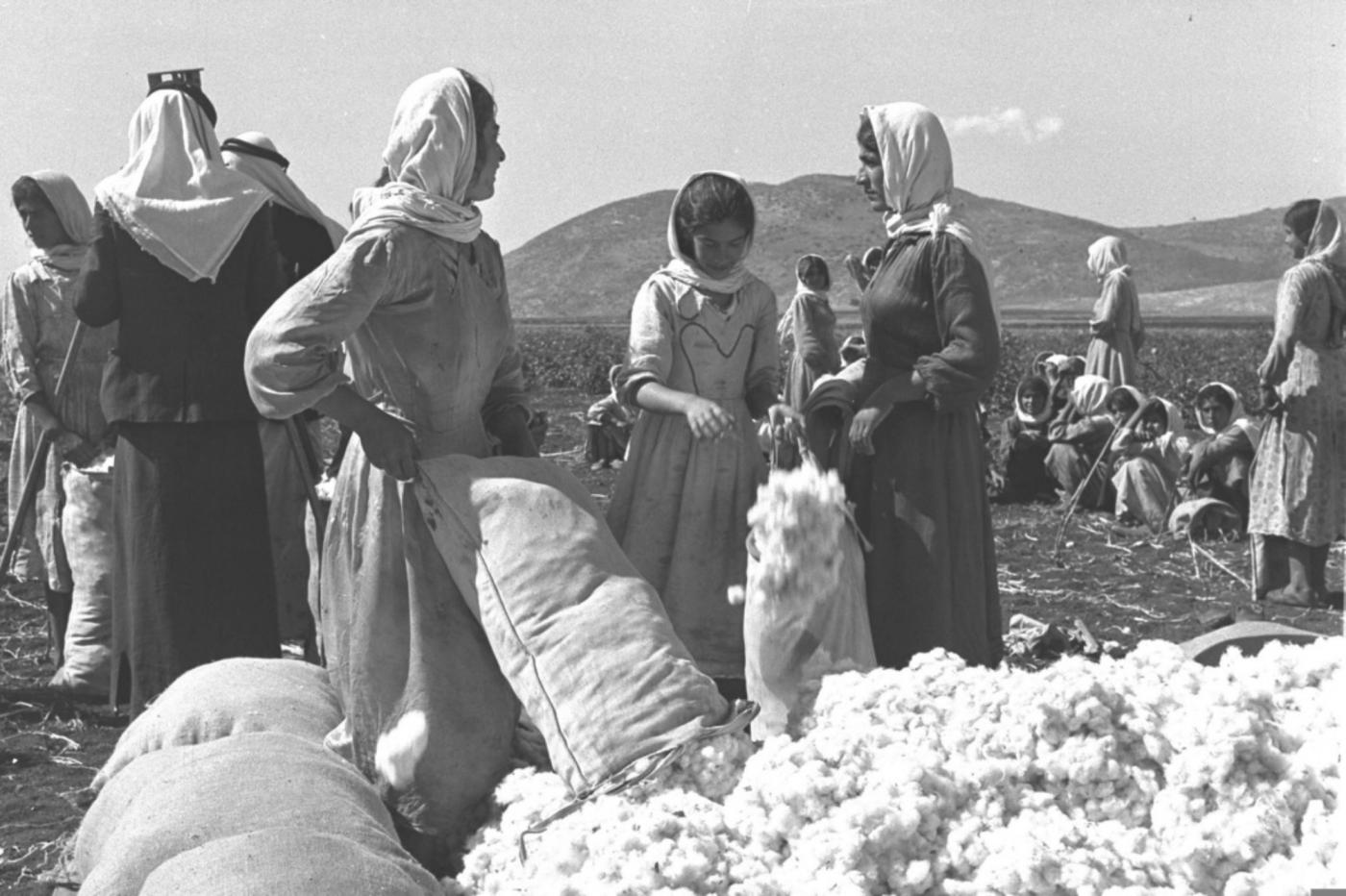 Palestinian women harvest cotton in the village of Kafr Saba in 1937
It should be emphasized that even the most zealous of Zionists will find it hard to disprove that Jaffa's citrus plantations were first planted, marketed to Europe, packaged, and harvested by mainly Palestinian Arab companies, click here for the proof. As early as 1891, Ahad Ha'Am (a leading Eastern European Jewish essayist) tried to open many Jewish eyes to the fact that Palestine was not a desolate place, he reported upon visiting Palestine for three months in 1891:

"We abroad are used to believe the Eretz Yisrael is now almost totally desolate, a desert that is not sowed ..... But in truth that is not the case. Throughout the country it is difficult to find fields that are not sowed. Only sand dunes and stony mountains .... are not cultivated." (Righteous Victims, p. 42)

For the moment, let's assume that the baseless myth is true, the questions that many Palestinians ask are:

This baseless myth, although an outright lie, attempts to paint a romantic vision for the "Promised Land" i.e. that it was destitute for 2,000 years until the "returning Jews" made its desert "bloom". It is sad to see how far this myth has been propagated in the Israeli school system and society in order to legitimize the continued collective dispossession of the Palestinian people.