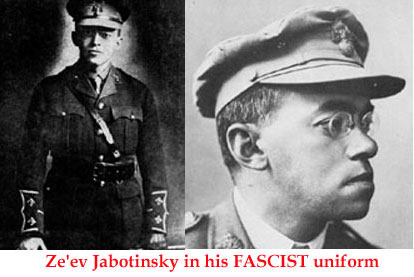 For the average Palestinian, this question implies that the Palestinian people should pay the price (or to be blood libel) for the collaboration of a few individuals with the Nazis! Although there were a minority of Palestinians who collaborated with the Nazis, a whole nation and its future generations can’t pay the price for the choices of a few. It isn't only that the Palestinian people (and most of the Arab countries as well) aided the allies with men and logistical support, they also didn't heed Mufti's calls for Jihad against the Allies, which he declared in April, 1941 (Righteous Victims, p. 165-6).

Since the Palestinian people were promised full independence in 1949, and strict limitation on Jewish immigration to Palestine, based on the 1939 White Paper, Palestinians had an incentive to help the Allies win the war. It should be noted that several Palestinian brigades were enlisted into the British Army, and the Palestinian resistance to the brutal British occupation almost completely ceased during and after WW II (see 1936 Great Revolt).

In general, the Palestinian people are proud of the fact that they were among the few who did not collaborate openly with Nazis. On the other hand, the peoples and governments of France, Italy, Japan, Romania, Croatia, Chechnya, Hungary, Ukraine, Austria, Bulgaria, Switzerland, ... etc. all collaborated openly with the Nazis. Tragically, many of these peoples and governments happily pointed out their Jewish citizens to the Gestapo. Therefore it's unfair, if not outright criminal, to exploit al-Hajj Amin's conduct in order to eternally condemn the Palestinian people as Nazis or antisemites, while ignoring the choices made by most European peoples and governments who openly collaborated with the Nazis. At least the Palestinian people did not harbor nor cover up for Nazi war criminal as the US have done for decades, click here for details. It should be noted, that as Palestine was forced to receive persecuted European Jewish citizens as refugees; the US government denied entry visas to wealthy German Jews in 1939, and returned them back to Hamburg! 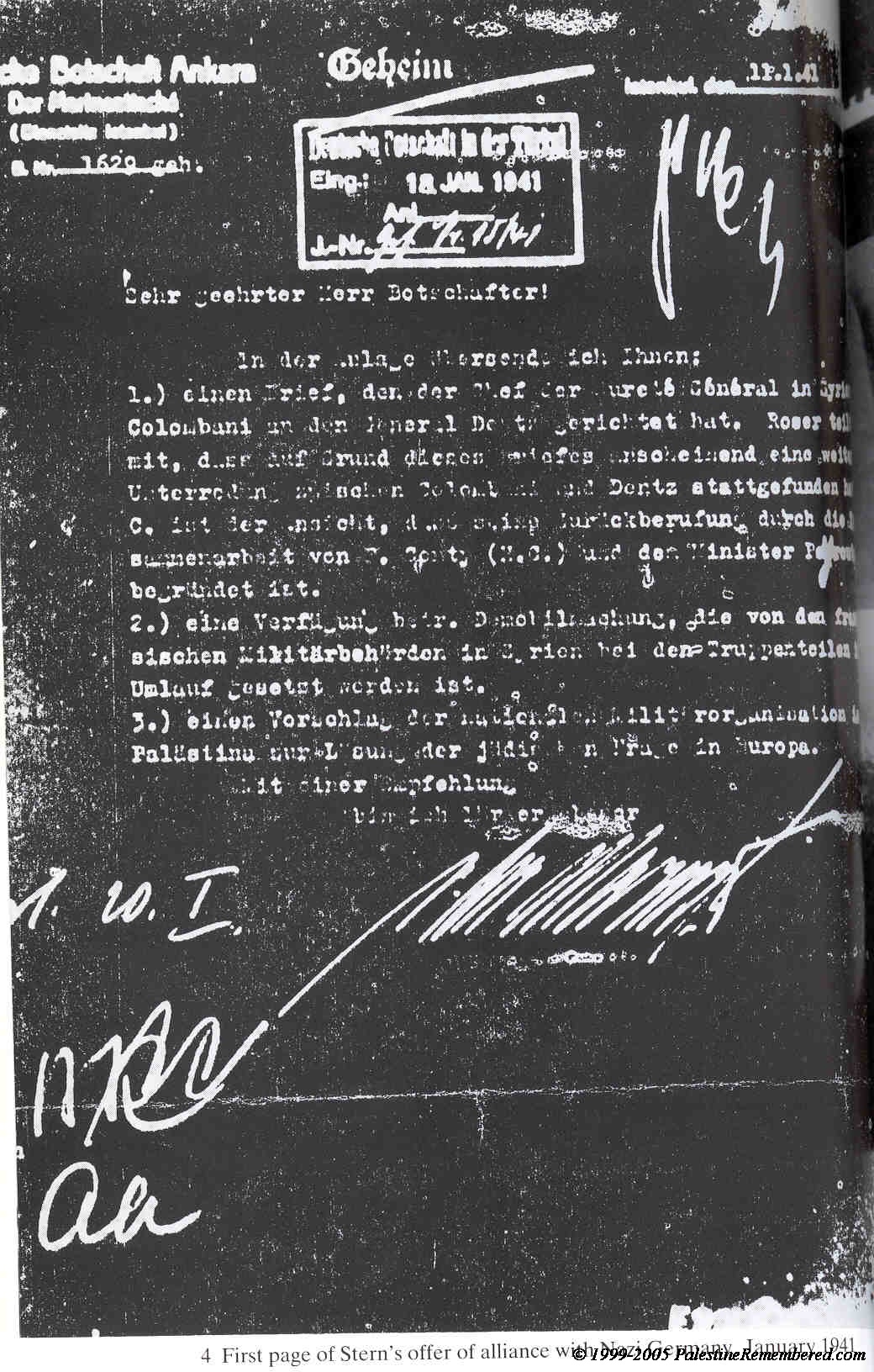 A letter sent by the Stern Gang asking Nazi Germany for alliance, 1941
Let's assume; of course God forbid; that it was Zionist leaders, who actually did collaborate with fascists (i.e. Mussolini) & Nazis Germany; would you (speaking to Zionists & Jews) condemn Jews for the decisions of such leaders? Would you hesitate in weaponizing Never Again, antisemitism, and the Holocaust (the same way they are often used against Palestinians), but now against Jews? Well; well, be careful of what you've wished for; continue reading the next few paragraphs!

IRONICALLY, the shocking truth is that it has been proven that the Jewish Stern gang & Betar received funding and arms from Italian Fascists to resist British forces in Palestine. In fact, Stern gang's collaboration with the Fascists and Nazis was going on while their Jewish brothers were being persecuted in Nazi concentration camps (as late as 1941). It should also be noted that when the Americans, British, and their Arab allies were busy blocking the Desert Fox's (Erwin Rommel) advances in north Africa, the Stern gang's leader Yitzhak Shamir and the Irgun gang's leader Menachem Begin were busy ambushing British soldiers, blowing up the vital Haifa-Cairo railroad supply line, and terrorizing British and Palestinian civilians (Righteous Victims, p. 174). And when Yitzhak Shamir, Israel's future Prime Minister in the 1980s, was asked to explain their collaboration with the Fascists, he replied:

Since these findings have only have only JUST started to surface lately (and are kept smothered in many Jewish communities), we feel it's necessary to directly quote one of the MOST pro-Israel historians, Martin Gilbert, who wrote:

"Avraham Stern who had formed a breakaway 'Irgun in Israel' movement (also known as the Stern Gang), tried to make contact with Fascist Italy in the hope that, if Mussolini were to conquer the Middle East, he would allow a Jewish State to be set up in Palestine. When Mussolini's troops were defeated in North Africa, Stern tried to make contacts with Nazi Germany, hoping to sign a pact with Hitler which would lead to a Jewish State once Hitler had defeated Britain. After two members of the Stern's Gang had killed the Tel Aviv [British] police chief and two of his officers, Stern himself was caught and killed. His followers [chief among them Yitzhak Shamir who led the Stern Gang after Stern's death] continued on their path of terror." (Israel: A History, p. 111-112)

Frankly, there is no justification for Mufti’s shameful collaboration with Nazi’s during WWII; however, we should put this into a larger context were the majority of European and Zionist leaders either did similar things, or sought alliance with Nazis as late as 1941. One thing to add in the case of Mufti, he was hunted down by the British & Haganah, and as a last resort he went to Germany looking for aid after being chased out of Iraq in 1941. Therefore, Palestinians wonder: 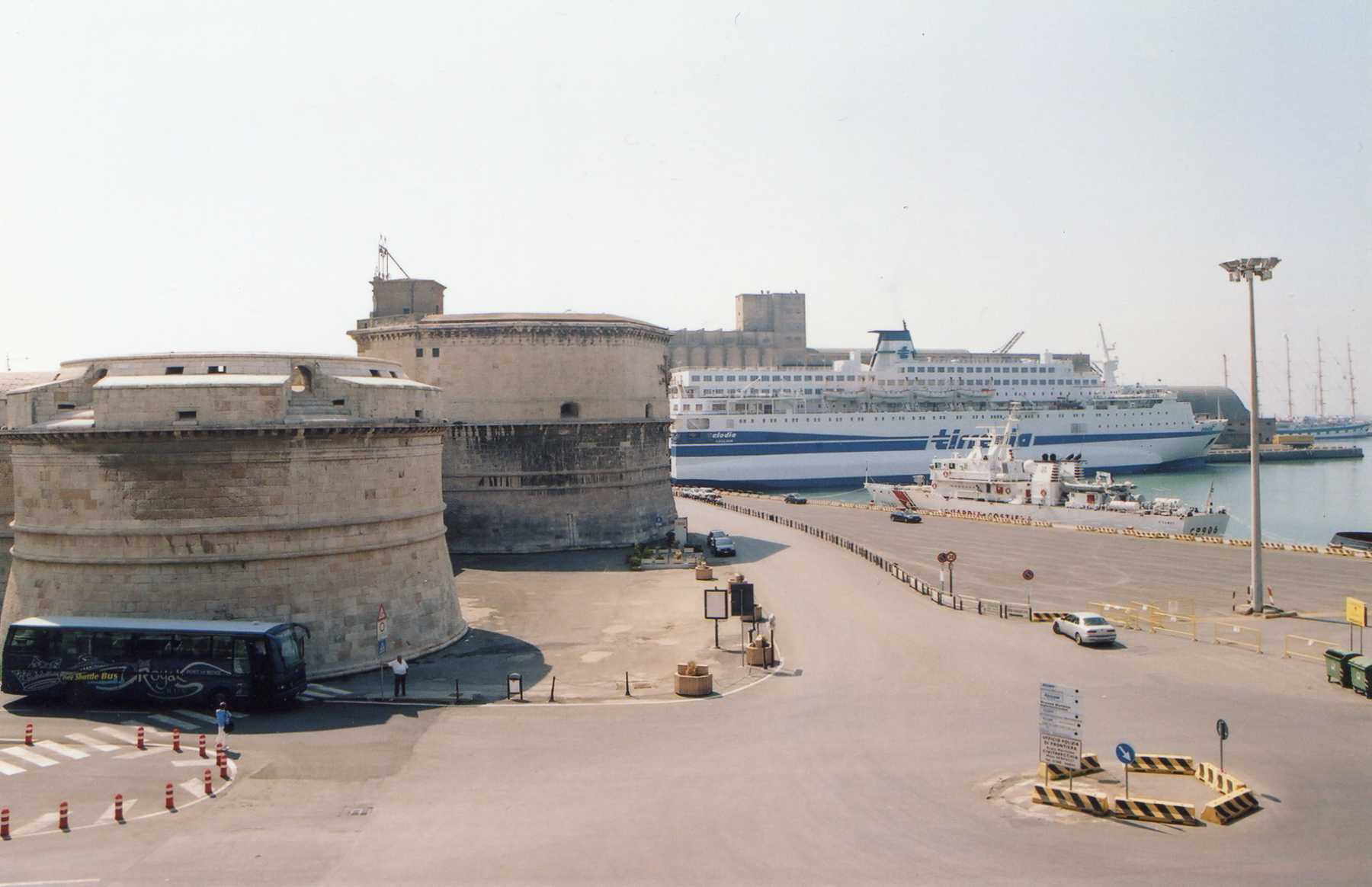 Mussolini's gift to Zionists: Betar Naval Academy
What makes many Palestinians and Arabs VERY ANGRY is that the memories of the Holocaust are being weaponized to paint Palestinians as Nazis & antisemitic. Palestinians have legitimate political grievances: they were dispossessed and ethnically cleansed out of their homes, farms & businesses. Such dangerous propaganda tactics are continuously fed to many Israeli school children from inception, especially upon visiting the Holocaust museum at Yad Vashem. It should be emphasized that many life size pictures of al-Hajj Amin standing alongside Hitler are on display at Yad Vashem, just West of Jerusalem not far from DEIR YASSIN. It's hypocritical when many Zionist Jews hold Palestinians responsible for the "ill fated" choice of al-Hajj Amin, while Israelis and Jews still blind themselves to the choices some of their leaders made during WWII. Sadly when the Holocaust is weaponized willy-nilly to paint Palestinians as Nazis; actually that debases Shoah and dishonors its victims.